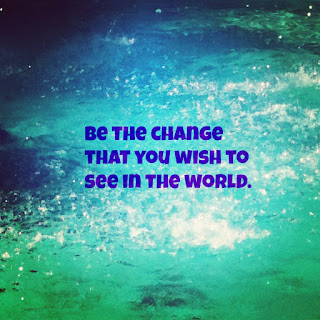 You've probably seen the Gandhi quote, "Be the change that you wish to see in the world,” somewhere. You might even have it tacked up on the wall of your office, or home.

Well, guess what? It really works.

Last week, I started a (free) Coursera class, Inspiring Leadership through Emotional Intelligence, which I'm loving.  One of the modules is about emotional contagion. Basically, how you feel and manage your feelings affects other people. If you go into work feeling sad, or angry, your co-workers may start to feel the same way. Even if you put on a happy face, if you're feeling down or discouraged inside, they will pick up on it.

In the same module, they talked about social contagion, which means that if you change your behavior, there is a good chance that someone you know will change his, or her behavior. Also, your behaviorial change has the potential to impact one of your friend's friends, or a member of her social network, even if you've never met him. There is also some evidence that your behavior change could influence behavior change three relationships out!

How cool is that?

So, let's all think about the change we'd like to see in the world, and figure out how our behavior can be part of the change. It will make a difference!

The Grandmother Power Blogging Campaign is a collaborative effort of hundreds of bloggers writing about how grandmothers are changing the world from May 7-14, 2013. It's being organized by Tara Mohr (creator of the Ten Rules for Brilliant Women Workbook), and Paola Gianturco (author of Grandmother Power: A Global Phenomenon). You can read all of the Grandmother Power posts, and add your own on taramohr.com.

"Some people don't even begin to use all the power they have." ~ my Gram

"I think the answer to everything is education. You can try to re-educate some of the older people, but it's not an easy task. When people are older, and have established ideas, it's pretty hard to re-learn. It's better to learn to begin with, than to have to re-learn." ~ my Gram 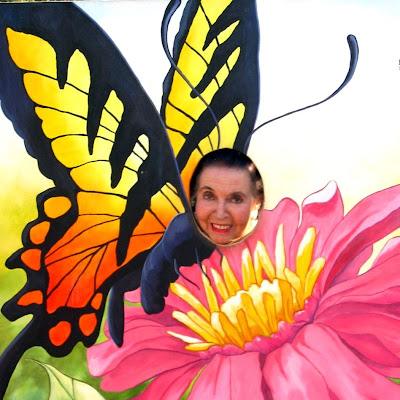 My grandma is one of my favorite people in this world. She's ridiculously fun, and she's always doing good (e.g. driving friends to doctor appointments, taking care of friends who are sick, building community in her apartment complex by organizing parties). To celebrate Grandmother Power, I asked her about how she thinks the world has changed, and what it needs in order to be better today.

How do you think the world is worse, or more challenged than it was when you were growing up, or a young adult?

Well, I think some of the value systems have changed, and people are not held to quite as high standards as they used to be. I think the fact that there is a greater population makes it harder to keep things under control. As a result, I don't think the world is in as good a place as it was when I was younger.

I think there's more crime. I think a lot more young people are not living up to their potential, like they could.

What do you mean, that they're not living up to their potential?

What do you think is better in the world than it was when you were growing up, or as a young adult?

Well, I think communication is tremendously better. Everyone is able to be connected easily because of the communication we have today. It's easier for everyone to get information.

How are we going to make the world better?

I think making the world better starts with the family. The value system in the family. It goes back to being good parents, mothers and fathers giving out value systems in the formative years, when it's important for children to learn the difference between right and wrong, and what's good and bad.

What are some of the values that you think have changed over the years that need to be passed on?

From what I see, there are a lot of adults, like in Congress, who are disrespectful, so is it necessarily the young people whose fault it is?

I agree with you one hundred percent. It goes into industry, and like you said, Congress, and different places where value systems have changed.

We need to change how we educate young people, but it's going to be a long time till they are going to be making the decisions.  What do you think has to change with how adults are doing things today?

Unfortunately, sometimes, by the time you're an adult, your behavior, your ideas and what you do is pretty well established, and sometimes pretty hard to change.

We're out of luck, unless we educate the next generation differently?

I think the answer to everything is education. You can try to re-educate some of the older people, but it's not an easy task. When people are older, and have established ideas, it's pretty hard to re-learn. It's better to learn to begin with, than to have to re-learn.

So, you think what we need is to have better education so that young people learn to respect other people's needs as much as their own, and become more of who they're meant to be?

Absolutely. Understand their abilities and make use of them, which I think a lot of young people do today, but I still think there's more room for others to do it.

I feel like these days young people are very smart, they have a lots of ideas, they've grown up in a society where people invent things, and they come up with companies, or they make an app, and it turns into something. Is that what you mean, or is it that they need to learn to make the most of their potential to change their community?

I think they need to learn to make the most of their potential, and then out of that potential often comes the results that you want. They need to find out what abilities they have, and use them. Some people don't even begin to use all the power they have.

More peacemakers and more understanding of each other.

I think so too. You can read all of the Grandmother Power posts, and add your own on taramohr.com.