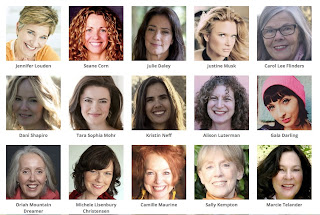 My friend, Jennifer Louden, is hosting a free, online event this week (September 23-28), The Shero's School for Revolutionaries. Each day she'll be sharing streaming audio and video interviews with women about how to express your gifts in service to the world. Each interview will be streamed for free for 24 hours from their start time.

Here's the line up for today, Monday, September 23:

Why Do I Do Good: The Center and Agape

I'm exploring the roots of my desire/need/compulsion to "do good." I don't usually share personal stories here on Have Fun, Do Good, and I'm not sure where this is going, but I'm giving it a whirl. Here's the link to my first post, Why Do You Do Good? 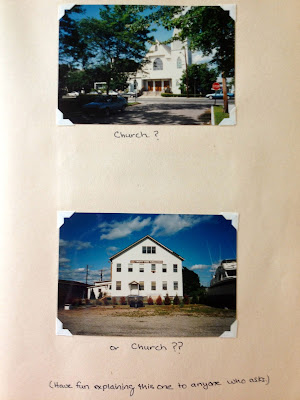 In 1975, when I was five, we moved from Vermont to Mystic, CT.  The local Catholic Church, St. Patrick's, had been in a fire, so Masses were held in a church-owned building next door, The Center, while the church was being repaired. The main room of The Center was a gymnasium. On one end was a wooden stage with a thick velvet curtain. On the other end was a kitchen where coffee and donuts were served from after Mass.

Once the church was repaired, everyone went back to the church with the steeple, except for the people of the 11 o'clock Mass, where many families with young children, like my parents, often went. They preferred sitting in folding chairs arranged in a circle (rather than in rows of pews), fabric banners hanging from the ceiling (rather than a crucifix), and singing modern hymns led by a "folk group" with guitar, bass, clarinet and drums (rather than an organ and dusty hymnals).

Mass went for about an hour and the coffee hour lasted for another hour, sometimes longer. Once the folding chairs were cleared, the large space was perfect for the 30+ children to run around in while their parents socialized, or had meetings. Often the meetings were about how to keep the Mass in the Center.

Over the next ten years, or so, the people of the 11 o'clock Mass fought to stay in The Center. From a child's eyes, it seemed like they were the most active members of the parish, organizing community events and giving back. Over the years, a variety of priests and the Bishop visited to assess whether, or not the Mass in The Center constituted going to "real church."

I remember the passage, For where two or three are gathered together in my name, there am I in the midst of them (Matthew 18:20), being cited often, but it was to no avail. In the late 80's, the people of the 11 o'clock Mass were told to return to the church with the steeple.

It was during this time, when I was 15 or 16, that I wrote the Bishop to say that I thought it was wrong that the 11 o'clock Mass couldn't meet in The Center, which is why I wouldn't be getting confirmed along with the other teens in the parish. He wrote back a not very nice letter explaining why I was wrong. I chose not to be confirmed.

Some of the members of the 11 o'clock Mass went back into the church building with the steeple, but many of them, including my parents, created their own weekly worship experience in the warehouse of a religious book publisher, a couple, who had been a part of the group at The Center.

Each Sunday, they put up their banners and placed their folding chairs in a circle in a drafty room with windows looking out on the Mystic River.  One person would lead the service with a reading from the Bible, and a "homily" of sorts, based on the reading. The folk group led everyone in the same songs we'd sung at The Center. On the back wall, a big silver coffee maker brewed coffee during the service, and people brought treats to share during coffee hour while the kids played in the warehouse, and by the water.

They called it Agape, which basically means, a selfless love for everyone. It still exists almost 30 years later.

Photo: This is a page from a scrapbook about growing up in Mystic that my childhood friend, Jill, made for me when I moved to California. The top photo is of St. Patrick's Church with The Center to the left, partially obscured by a tree. The bottom photo is of the building where Agape was first held.

Why Do You Do Good? 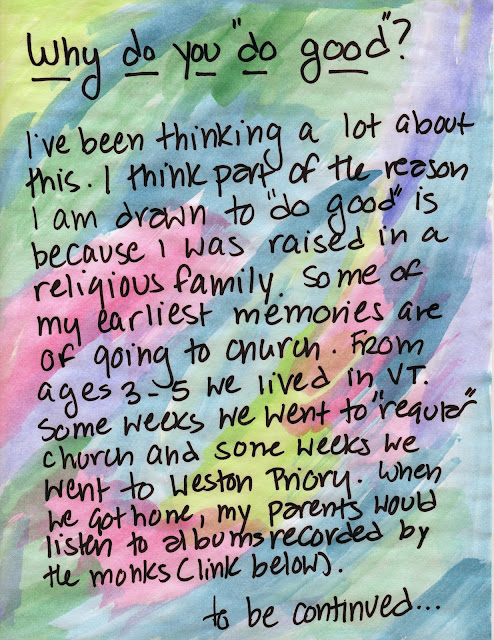 Listen: The Monks of Weston Priory 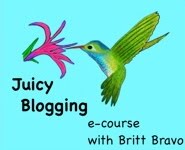 The next Juicy Blogging E-Course starts September 5th!
Posted by Britt Bravo at 11:59 AM 7 comments: 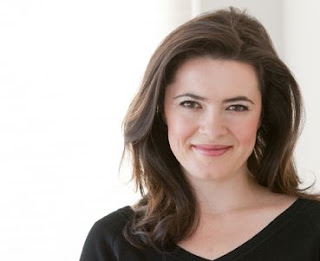 "I really believe if women are playing big, we are going to have a more peaceful,
more sane, more humane world."
~ Tara Mohr

This month's Big Vision Podcast features Tara Sophia Mohr creator of the Playing Big leadership program for women. Tara is a writer, coach and an expert on women's leadership. Her work helps women play bigger in their work and in their lives.

With an MBA from Stanford University and an undergraduate degree in English literature from Yale, Tara takes a unique approach that blends inner work with practical skills training, and weaves together both intellectual rigor and intuitive wisdom.

She has a deep commitment to amplifying women's voices. her 10 Rules for Brilliant Women have struck a chord with tens of thousands of women around the world. In 2010, Tara was honored as a Girl Champion by the Girl Effect organization, which supports girls' education in the developing world.

Tara is  a co-creator of two anthologies of contemporary women's writings, The Women's Seder Sourcebook and The Women's Passover Companion. She is also a poet and the author of Your Other Names.

She is a regular contributor to The Huffington Post and has been featured on TODAY, BigThink.com, Whole Living, CNN.com, USA Today, International Business Times, Ode Magazine, Forbes, Beliefnet, and numerous other media outlets.

You can learn more about Tara and the Playing Big Program at taramohr.com and follow her on Twitter at @tarasophia.


You can listen and subscribe to the Big Vision Podcast via iTunes, or on the player below (if you're reading this via email, or rss and can't see the player click here to go to the original post). If you like the show, I'd really appreciate it if you took a moment to rate and review it on iTunes.

If you have suggestions for people I should interview, please email me at britt AT brittbravo DOT com.