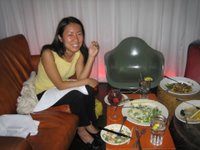 This week's Solutionary Woman is 24-year-old Heddy Nam, the Associate to the Chief Operating Officer of Amnesty International USA and co-founder of Never Again, an international network of young people working for peace. Heddy also writes for the Global Youth Fund blog. I came across her work while researching examples of nonprofits using the social web for social change for NetSquared and am looking forward to meeting her in person when she speaks at the NetSquared Conference next week.

When I meet young solutionary women of the next generation like Heddy, Mei-ying and DeeAnn, I feel hopeful about our world's future.

After reading the interview, Heddy has asked that I modify some of her answers. Below is the modified version as of May 24, 2006.

Describe the work you do for Amnesty International.

As the Associate to the Chief Operating Officer, I assist the COO in overseeing the work at Amnesty International USA. It is a jack-of-all trades position: I do everything from helping to maintain our Intranet, manage our internal news bulletin, work with our Board of Directors, conduct research that helps shape the strategic direction of our organization, and more. Coming from a background in developing and implementing programs, it was a challenge to shift to the operations side of the non-profit world. However, I am learning a lot about non-profit management and discovering more about the human rights movement both within the US and internationally. The next big project on the horizon is working on AIUSA’s next strategic plan. This project will tackle big questions such as: What are the most pressing human rights problems in our world? What should AIUSA’s role be in improving or resolving those situations? The outcome will hopefully improve Amnesty’s effectiveness, helping more people in the long run.

Describe the work you do with Never Again and maybe a bit about the project.

Never Again is an international network that connects young people around the world to generate ideas and action for peace. It was founded in 2001 by a group of college students from all over the world who wanted to ensure that “Never Again” became a reality rather than a rhetorical sound bite. They remembered learning in school about the Holocaust in World War II and the international commitment that genocide would never happen again. Later, they learned that it happened again and again – in the cases of Cambodia, Bosnia and Rwanda - and it was still happening but nobody was doing anything about it. They quickly learned that the politics of genocide intervention dictate that it’s not a problem worth prioritizing because it doesn’t serve anyone’s political or economic interests. That’s when they decided that youth, who are idealistic, energetic and open-minded, would be the engine to peacebuilding to ensure that genocide does not go unchallenged. Since then, the network has grown to include hundreds of members residing in the UK, Rwanda, the Democratic Republic of Congo, Burundi, China, and Canada.

I traveled to Rwanda in December 2005-January 2006 and did field work with Never Again-Rwanda. When I returned to the US, I founded the USA chapter in New York City with long-time Never Again member, Marian Hodgkin from the UK. We live together in Harlem and co-direct the chapter, which is growing fast, in our time off from our full-time endeavors. In the US context, we are focused on building an awareness of issues involved in genocide and post-conflict peacebuilding as well as connecting American youth to our partners in other parts of the globe to plug them into cross-national, cross-cultural collaboration. We also seek to problematize genocide and factors leading up to genocide to show that:
* conflict that erupts in violence is not the problem of the uncivilized, but rather it is a problem that is common to humanity
* each individual has the capacity to make a difference by acting as an ambassador of peace
* there is more to genocide prevention and intervention than sending in a peacekeeping mission. For example, resolving interpersonal conflict peacefully, examining discriminatory attitudes, and addressing genocide’s effects on society can all contribute to a world where “Never Again” is a reality.

To that end, we recently held a conference at Columbia University called “Teaching About Conflict, Building Towards Peace: A Comparative Forum.” The event brought together academics and practitioners in the field of education and peacebuilding from local, national and international perspectives to see what similarities and differences there were in our approaches and what we could learn from each other.

In the coming months, we will be developing a toolkit for young people to develop projects for peace within the US, planning a Genocide Awareness Month of Action in April 2007 within NYC high schools, and organizing a delegation of American university students to travel to Rwanda to conduct fieldwork in the summer of 2007.

What do you enjoy the most about your work with Amnesty International and Never Again?

It is terrific working with people who are like-minded and passionate about improving the world. On a deeper level, it is satisfying to work with organizations whose work resonates with my personal beliefs: Amnesty and Never Again place equal emphasis on the power of the ordinary individual as well as experts or powerful people. Politicians do have a responsibility to improve society as public servants, but ordinary people also have an individual responsibility to be informed and engaged citizens. Many people avoid the news because most of it is really depressing. They would rather opt for MTV. If I didn’t have the power to do anything about the world’s problems, I would probably do the same. But both organizations show us that anyone has the ability to affect change by doing something as small as signing a petition or engaging in constructive dialogue. Along the same lines, it is not only our responsibility to speak out about injustice, you lose a sense of your own humanity when you ignore the plight of others who are suffering.

What are the biggest challenges in your work with Amnesty International and Never Again?

One common challenge both organizations face is the apathy that exists about critical issues of our time. It is vital that everyone pays attention because politicians really do listen to citizens, who hold the power of the vote. On the other hand, some politicians may care a great deal about improving human rights abuses or ending the violence in Darfur, but don’t act because they don’t have constituent backing.

Specifically with Never Again, our challenges stem from the fact that we are the new kid on the block within the US non-profit market. This makes it difficult to sustain ourselves organizationally in terms of fundraising and getting American young people’s attention. American youth luckily have many options in terms of organizations within which to be active in. Another big challenge with Never Again is that we’re spread out across the world, so it’s difficult to keep up day-to-day communications with each other in terms of major issues in our work.

What keeps you motivated and energized to do this work?

When it comes to the suffering of others, I don’t have to think twice about what motivates me. When I read the papers, listen to the news, hear stories through my network of friends who are activists all over the world about injustices, I get really fired up and want to do whatever I can to help!

In addition, being a woman, an immigrant in the US, and being of a working class background, I feel close to issues of discrimination and inequality. I also grew up with domestic violence in my family. Experiencing violence firsthand makes you realize how senseless it is.

Lastly, it is rewarding to be involved in work that is making an impact on the world no matter how small my part in that work is.

What tips, resource and advice would you give to someone who wanted to do the kind of work you are doing, or just wanted to make a difference in human rights issues?

The first step is to get educated. You can’t do anything unless you are first aware of the issue and know enough about it to come up with solutions to the problem. If you don’t know enough, you might end up hurting the situation rather than being helpful. Some ways to learn more are reading the newspaper, watching documentaries, reading reports from non-governmental organizations like Amnesty International or Human Rights Watch, and talking to people in your community who are working on these issues. Or better yet, talk to people who are being affected by the situation if you can. Talking to survivors of genocide was what got me really fired up about the issue more than just reading books about it.

After you have done your research, don’t keep it to yourself. Use your voice! Speak with those in your community to spread awareness about injustices that you know about or write to those who are in a position to influence the situation.

Finally, find those who are like-minded and work together to contribute to a solution. It’s not only difficult to do things alone but demoralizing too, because some situations seem so bleak that you don’t believe you can make a difference. But if you combine your energy and talents with others’ and you’re all pulling in the same direction- it’s amazing what you can accomplish!

Just remember that everything you do - whether it’s writing a letter to your representative, fundraising for a non-profit organization that works on the issue, or blogging about the problem - it all adds up! Lastly, trust your gut instinct and do what you love. Chances are that you’re probably good at the things you like to do, and that will likely be the most helpful contribution!

If you know a Solutionary Woman who works at a nonprofit or NGO who you think I should profile, please email me at britt at brittbravo dot com with their name, organization and contact info.