People are Ready for a Vision-led Movement 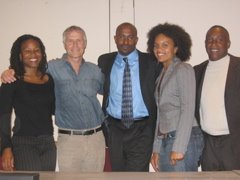 Last Thursday I went to hear Majora Carter from Sustainable South Bronx, Paul Hawken, author of Natural Capitalism and The Ecology of Commerce, Van Jones from the Ella Baker Center for Human Rights, Geralina Fortier from People's Grocery, and Bruce Cox of the Alliance for West Oakland Development speak at the first Solutions Salon. They were brought together by the Ella Baker Center for Human Rights' Reclaim the Future program to talk about how to make Oakland a model city that uses the growing green economy to lift its low-income residents out of poverty. 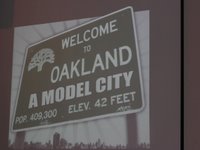 EBC's Director, Van Jones, opened the evening by saying, "The communities who have been locked out of the polution-based economy, must be locked into the clean, green economy. . . .We are going to make Oakland the new Silicon Valley for green capital."

MacArthur "Genius Fellow" Majora Carter talked about her work in the South Bronx, where there are 15 waste transfer stations within a one mile radius that handle about 25% percent of New York City's waste. Fifty percent of the residents live at or below poverty level, 1 in 3 children are diagnosed with asthma and the ratio of parks to people is one of the lowest. Some of the solutions that Sustainable South Bronx is working on are:

The Solid Waste and Energy Program, a program working to distribute NYC's waste more equitably. They are also working to convert a former dump into a Recycling Industrial Park that could create 300-500 jobs. Ironically, the city wants to put a 2,000 bed prison there instead.

Carter closed by asking the audience to use their skills and talents towards action against environmental injustice. She urged, "You are all a precious natural resource, don't waste it."

Hawken, who is writing a new book, Blessed Unrest, about the growing movement toward sustainability and social justice, estimates that 99% of the energy we use is wasted and that, "an economy that wastes its resources always wastes its people."

20-year-old Geralina Fortier exemplified how green job training can make a difference in young people's lives. Geralina started out doing the 20 hours of community service her high school required at People's Grocery, a West-Oakland based food justice nonprofit. (I recently inteviewed their Executive Director for my podcast). She described herself as coming from a "Top Ramen generation" where, "it wasn't about eating healthy, it was about eating at all." She is now the Community Education Coordinator for People's Grocery and studying to be a registered dietician.

Bruce Cox, who is the Board President of the Alliance for West Oakland Development and the founder and owner of MBC Construction, trains ex-offenders ages 17-30 in construction skills. He talked about how important it is to teach youth, "not just how to get a job, but how to hold on to a job," and not just how to build buildings, but how to build their money. Youth need training, "so that they are part of society, and not on the outside looking in."

Jones closed the evening by saying, "We are trying to bring a vision of hope back not just to our communities, but to our nation. . . .People are ready for a vision-led movement in the United States."

If you want more information about Reclaim the Future and future Solutions Salons, you can contact Alli Chagi-Starr (who I also interviewed for my podcast) at allistarr AT ellabakercenter.org.