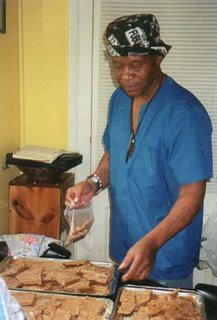 I guess the theme of the day for me is candy.

One November 4th, NPR's Story of the Day podcast was about Robert 'King' Wilkerson who was in the Angola State Penitentiary in Louisiana for 31 years. 29 of those years he was in solitary confinement, basically as a political prisoner, because he was a Black Panther. He started a chapter of the Black Panther movement with two of his other friends. They became known as the Angola Three.

While in solitary confinement, he created a kitchen from a stove made of coke cans and he burnt toilet paper rolls to get heat. And in this kitchen he made pralines.

Eventually, it was decided that a mistake had been made, and King was released. Now he sells his candies, which he calls "Freelines" to help raise consciousness about political prisoners.

You can go to:

to order Freelines and to get more information about the Angola 3 and how to help the two men who remain in prison.