Give it up for the kids y'all 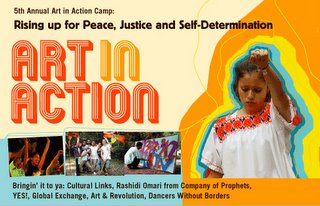 Last weekend I went to a great house party/fundraiser for Art in Action camp, a 10-day cultural boot camp for budding teen activists. The 10-day summer camp in Ben Lomond, CA offers dance, poetry, hip-hop, spoken word, singing, drumming and giant puppetry workshops mixed in with education about social and political issues. Most of the participants are between the ages of 17-25, working class and youth of color.

Julia Butterfly Hill told a story about how at the end of her recent 3-month We the Planet Bus Tour, she was in Flagstaff, AZ at an event to "Save San Francisco Peaks", a mountain that is sacred to 13 tribes and is being considered for ski resort development. While at the event she met a young woman who was the lead organizer of a youth coalition to save the peaks and low and behold, even though Art in Action camp is only 5-years-old, and takes place in California, this woman had gone to Art in Action camp.

Van Jones did the ask for the event. I guess because my work has been with and for young people for so long, I found it particularly moving when he said, "Every single person in this room used to be like these young people. You wouldn't be here on a Sunday night if when you were growing up you weren't scared, lonely, odd, left out, something to say but can't quite say it. And if you think about that and you add to it what they are going through. . . . What if somebody could have thrown you a life line?"

I wish that when education budgets were made for public school systems, someone would read that quote to the decision-makers to remind them what it is like to be a young person today. I've blogged about the San Francisco school gardening program, Urban Sprouts before. Here is a disturbing entry from their recent e-newsletter (Burbank and Jordan are schools the program serves):

Yesterday afternoon there was a murder in the neighborhood that Burbank and Jordan belong to. At school we were told that the shooters abandoned their car in McLaren Park, the park that touches our garden. All afternoon the students remained in lockdown inside the school. I went outside to the garden, and helicopters hovered just overhead, searching, beating the air so close to the garden. I never before felt unsafe in the garden. The panic, not knowing what could happen next, was physical. And this is the second shooting near school just since September. Our city’s 88th homicide of the year.

Urban Sprouts, Art in Action and Streetside Stories (where I worked for 6 years) are great programs, but they can only serve so many young people. Who is going to throw the young people who aren't in these programs a life line?

Finally, someone recently told me about a web site for teachers called DonorsChoose. Teachers submit project proposals for materials or experiences their students need to learn and individuals (like you and me) fund the proposals. Pretty groovy, huh?

So, when you're thinking about who to make your end of the year donations to, or what issues are worth picking up the phone and calling your Congressperson about, give it up for the kids y'all. Throw 'em a life line.

education
youth
activism
art
Posted by Britt Bravo at 10:48 AM