Activist Filmmaker on Speilberg's "On the Lot" 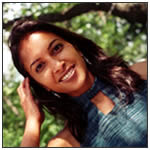 *Update July 8. Shalini is in the top 10. You can view her latest comedy short here. Her next film airs on Monday, July 9th 8/7c on FOX. The genre is Drama and the theme is "When 2 Worlds Collide."

*Update June 26th. Shalini is now in the top 15. Shalini will be showing her next film tonight, June 26th, at 8/7c on Fox. The genre being featured tonight is comedy, and Shalini's new short will be 1 of 6 films. After the show airs, you will have 2 hours to vote, with results being announced next week.

*Update June 4th. Shalini is now in the Top 15. The next episode will air in the US on June 5th at 8/7c. You will be able to vote for her again on the On The Lot web site. This is an incredible opportunity to generate widespread attention for her work as an activist filmmaker. You can view her new web site at 7thempiremedia.com

*Update May 28th. Shalini's 1-minute comedy short, "Love in 2007" made it to the voting round. To vote go to, http://www.thelot.com and click on "Vote" in the black menu across the top.

In February, I posted about Shalini Kantayya's short film about water rights, A Drop of Life, being entered into Steven Speilberg's On The Lot reality competition, and asked you to watch her film. Guess what? Your watching made a difference.

Out of 12,000 directors from 33 countries who applied, she is one of the 50 semi-finalists in the running to win a 1 million dollar filmmaking deal with DreamWorks.

If she makes it to the May 28th, "Film Premiere" episode, where the first films produced by the 18 finalists will be shown, she'll need your help again. The viewers will vote, American Idol style, for which directors will stay and which will go.

You can view Shalini's submission video about the privatization of water here and read more about A Drop of Life here.

Photo Credit: Shalini Kantayya from a Drop of Life