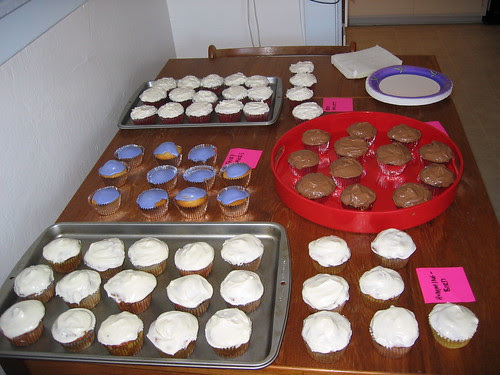 Cupcakes Take the Cake posted yesterday about Cupcake Day for the RSPCA. On August 18th, Australian supporters of the RSPCA (Royal Society for the Prevention of Cruelty to Animals) will bake and sell cupcakes to benefit the organization. The event's website, www.rspcacupcakeday.com.au has all the information you need to participate, as well as a recipe for "pupcakes" for your dog.

Selling cupcakes to benefit animals seems to be a popular theme. Check out Ace of Cupcakes' photos of dog-related cupcakes they made for a fundraiser, and these Flickr photos of 100+ cupcakes a woman baked to benefit the Western Pennsylvania Humane Society.

The 5th Annual Cupcakes for a Cause will be happening October 20-26th this year. They are asking bakeries to donate a portion of their sales from select cupcakes to CancerCare for Kids. You can also participate by hosting a bakesale for CancerCare for Kids between now and November 1st. For more information, go to the Duncan Hines National Bake Sale Contest site. A co-worker of ToRoxy, baked cupcakes that look like sushi to sell at their office as part of Cupcakes for a Cause.

I think it would be awesome to have a fundraising/friendraising event that revolved around an Iron Cupcake competition, like the folks at Iron Cupcake Earth are doing. (Iron Cupcake is a play on the name of the Japanese cooking game show, Iron Chef, where two chefs compete to create the best meal using one ingredient). This month's Iron Cupcake challenge is to develop a cupcake (that tastes good) using chili peppers.

What other examples have you heard of for how to use cupcakes for good?

Photo from my cupcake tasting party a few years ago.