A Kiva.org for Native American Entrepreneurs? 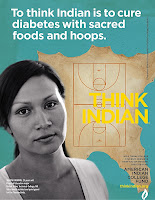 "Our tribal colleges and universities teach sustainability in everything they do, proving American Indians have long been ahead of the curve. This is what we call 'Thinking Indian.' As our nation grapples with its problems, American Indians are uniquely situated to lead with finding solutions."
--Rick Williams, President & CEO of the American Indian College Fund on his blog, In a Good Way.

Flipping through the Sunday New York Times earlier this month, I noticed a public service announcement (left) for the American Indian College Fund, with the slogan, "Think Indian: To think Indian is to save a plant that can save a people."

For whatever reason, it started my thinking that there needs to be a Kiva.org like program for American Indian, Alaskan Native and Hawaiian Native entrepreneurs. Kiva.org facilitates ordinary people, like you and me, making loans online to entrepreneurs in the "developing" world. According to the U.S. Census Bureau, the 2007 poverty rate of people who reported they were American Indian and Alaska Native, and no other race, was 25.3%.

As far as I know, nothing like it exists, although it could, now that Kiva has opened its API so that developers can build their own tools to fund entrepreneurs. Plus, according to a March 23rd article on CNNMoney.com, Micro-loans for Americans?, Kiva is going to be experimenting with loans to entrepreneurs living in the United States.

In April, PBS will air a new mini-series, We Shall Remain, about U.S. history from the Native American perspective. The series' site has lots of information on it, including a Native Now: Enterprise page with links and videos. One of the video clips highlights the success of the Citizen Potawatomi Community Development Corporation micro-loan program. I'm sure there are similar programs out there that could use a Kiva.org like tool to help get more loans out to their entrepreneurs.

Whaddya think? Good idea? Bad idea? Is there someone out there already doing it? Do you know anyone who would want to build it?

You can see images from the other "Think Indian" ads on In a Good Way, the blog of Rick Williams, President & CEO of the American Indian College Fund.