Life is a long experiment that includes successes and failures 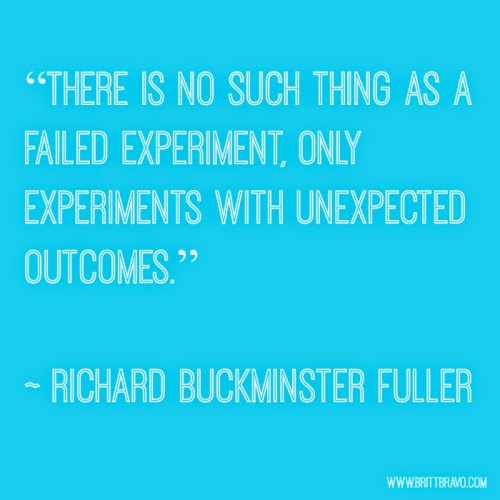 At the beginning of this year, 47% of Americans made a New Year’s resolution. Only 8% of us will keep it. But maybe that isn’t a bad thing as long as we:
Last weekend, I saw two movies, Birdman and Particle Fever, that portrayed very different attitudes towards success and failure. Without giving too much away about each movie, in Birdman, the former star of a comic book hero movie franchise tries desperately to regain his former success by writing, directing and starring in his adaptation of a Raymond Carver play.

He tells his daughter, “I’m trying to do something important,” to which she responds, “You’re doing this because you’re scared to death, like the rest of us, that you don’t matter.” Throughout the film, it feels like he is running from his failures in the past, and possible failures in the future.

Particle Fever is a documentary about the  launch of the Large Hadron Collider and the search for the Higgs Boson (aka the “god particle”), which some of the scientists interviewed have been working on for 20+ years!  I was struck by how different the attitude, as expressed by one of the physicists in the film, Savas Dimopoulos, was to failure:

“Jumping from failure to failure with undiminished enthusiasm is the big secret to success.”

Failure seemed to be an accepted part of the process, and a looooooooong process at that. As another physicist, Monica Dunford, says in a voice-over during footage of her going for a run:

“When you’re dealing with something that’s a long term project . . . you can’t think about the end. Ever. If you start off a marathon thinking ‘I can’t wait to get to the finish line. I’m going to have my data,’ or ‘I’m going to have my crispy french fries at the finish line’ or whatever motives you. If you start thinking that at mile one and it’s like ten minutes into the race and you’re thinking to yourself, ‘Wow, I’m only at mile one, I’ve got 22.5 miles to go.’ If you’re thinking like that at the start, then you’re done. Mentally you are done. This is what doing discovery physics means. This is what discovery means.”

I’ve thought about both films a lot recently and wondered: As I make future plans in reaction to past failures, am I being more like the actor in Birdman, or like the scientists in Particle Fever?

I have to admit that I have been being more like the actor in Birdman, running from failures and taking desperate actions in the hopes that future success would bury the memory of my failures, rather than embracing life as a long experiment that includes successes and failures.

So, I’m hoping to spend some time at the end of this month reflecting on some of my most recent failures with a “scientific method” type of lense:


* I will be moving Have Fun, Do Good over to my website, brittbravo.com.  If you would like to receive my posts via email or RSS, the prompts to subscribe are at the bottom of brittbravo.com.