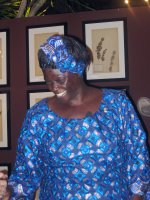 I have a confession to make. I didn't want to jinx it, so I didn't mention it in my book review of Wangari Maathai's memoir, Unbowed, but I finished the book last week because on Friday my husband and I flew to Los Angeles to hear Maathai speak at a fundraiser organized by the African Millennium Foundation.

Marsha Wallace, the founder of Dining for Women, contacted me after reading some of the posts I had written about Dining for Women here and on BlogHer, and invited my husband and I to be Dining for Women's guest at the event. Dining for Women was one of the evening's sponsors. They are donating the proceeds from next month's dinners to Maathai's project, Women for Change.

The event was held at Inner Gardens, a lush garden showroom filled with plants and flowers. After sampling all of the tasty appetizers from JAR and the Bombay Cafe, including the most delicious coconut cupcakes ever, we settled in to listen to Dr. Maathai.

She started the evening by saying, "When I started this work, I wasn't starting a movement." In June 1975, during the the International Women's Year, governments and women from all over the world met in Mexico City for the United Nation's First International Wonmen's Conference. At the time, Maathai was a member of the National Council of Women of Kenya (NCWK). During the two years leading up to the conference, the NCWK met to discuss what issues they thought should be included on the agenda. Mathaai describes the membership of NCWK as elite and urban, with an interest in issues particular to their situation, but when they reached out and heard what women from rural areas had to say--that they needed clean drinking water, nutritious food, firewood, and cash in their pocket (instead of having to ask their husbands for it)--their priorities changed. Mathaai suggested that they plant trees that would supply firewood to cook, provide wood to build fences for farm animals, and protect the soil and watersheds, which would allow the women to grow more food and have clean drinking water. The Green Belt Movement was born.

Originally she thought that the project would last a few years, and then they would move onto something else, but as they worked, they learned that environmental degradation was linked to government degradation and corruption, and that if you had too many inequalites and resources were badly managed, sooner or later you had conflict. The Green Belt Movement evolved into a pro-democracy movement resting on the beliefs that governance and management of resources needed to pre-empt conflict and that by sharing resources equitably, more people felt that they belonged.

Maathai closed by saying, "When a flower is ready to bloom, it blooms without reservation. It does not say, 'Today I will not bloom, I am moody.' It just blooms. Even when people are unhappy, it just blooms. Even if you are sad, when you see it, you smile. Those of us who care about the earth, we need to bloom."

After she finished reading an excerpt from her book, a staff member from Million Trees LA, a project of the City of Los Angeles working to plant 1 million trees, presented Maathai with a certificate of welcome from the city. 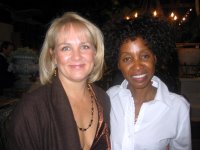 I felt really fortunate to hear and be in the presence of such an amazing woman, especially after reading her book. Big thanks to Marsha (pictured here with Malena Ruth, President of the African Millenium Foundation) and Dining for Women for including us.

The San Francisco Dining for Women group that I belong to met last night and we had a yummy dinner where I tasted my first banana cream pie, wow! Our donations this month will go to Women for Women International, an organization that helps women survivors of war rebuild their lives. For $27/month you provide one woman with the funds for basic necessities for her family and for job training. As her sponsor you also exchange monthly letters, which will hopefully provide emotional support as well.

I've really enjoyed all of the Dining for Women dinners I've been a part of and feel like our combined giving does make a difference. If you are interested in starting your own Dining for Women group, joining an existing group, or just want to host a one-time dinner click here for more info.