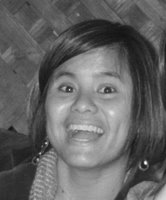 After a little hiatus, I am resuming my Solutionary Women series, profiles of women who are creating social change.

This week's Solutionary woman is Viet-Ly Nguyen, a former co-worker from Streetside Stories, who I interviewed for my Big Vision Podcast last winter. Streetside Stories is a San Francisco based arts education nonprofit that actually just started a blog, so give them a little link love!

Here is a partial transcript from my interview with Viet-Ly:

Viet-Ly: Streetside Stories is a nonprofit literacy arts program based in San Francisco and we work with the middle schools -- the public middle schools -- of the San Francisco Unified School District. There are a couple different parts to Streetside Stories and the one I work with is the Storytelling Exchange. I work with a co-facilitator and we visit sixth grade language arts and social studies classes for two-week writing workshops. Our writing workshops focus on autobiographical writing and storytelling, and we actually do a lot of storytelling performance and theater with the students. It's really neat because the students work on one autobiographical story for two weeks, and at the end they have one complete story that they can call their very own. We publish a quarter of all of the students' stories in our annual anthology, which you can find in San Francisco bookstores [and on the Streetside web site]. It's really neat because they are published at the age of eleven or twelve and their picture is in it, and they show all of their family and friends.

Britt Bravo: Are there any young people that you've worked with who were super-challenging in the class, either academically or behaviorally, and you saw that arts education made a difference to them?

Viet-Ly: There was one student that I worked with, a sixth-grader, who had gone through a lot of troubling things. His cousin had just recently been shot and killed, accidentally, and he actually got to write about that. The story is one of the most powerful stories I've ever read and it just really shakes you up because he's very honest about the story. What happened was that he was walking along the street and they found a gun, and they went back to their grandma's house, and they decided to play with the gun, and the gun went off accidentally and shot and killed his cousin. He'd been traumatized throughout the whole year by that, and he finally got to write about it.

At one moment, I just remember he kind of just stopped. He's a big kid, people see him as a bully, everybody is scared of him, but also wants to be his friend because they want him on their side. He just took a moment and stopped and he was like, "Wow! Thank you, Viet-Ly!" Just very sincere. That you don't see a lot from sixth-graders: when they take the time to really say, "Thank you", or say something that's on their mind or, "It was nice to meet you". I actually had that again student this year because he repeated the sixth grade, and this year he got to write about repeating the sixth grade, what his decision was about that, and what he needed to decide to do from that point on to be successful.

Actually, we went to a different school later on in the school year and I actually saw him in the schoolyard of that new school. He had gotten expelled from the other school and came to this other school. He was like, "You know, Viet-Ly, I checked all my classes, and the teachers I have right now, they don't have Streetside Stories so I'm bummed."

Britt: What part of your work as a teacher for Streetside Stories brings you the most joy?

Viet-Ly: I'll hear students say, "I really want to thank Streetside Stories for coming here because if you didn't, then I would just keep this story in my heart, and it would be really heavy, and now I get to write about it." Hearing things like that, making it possible for students to write about stories, guiding them along the way, it's just a small impact, and it might not last forever, but at that point it's very crucial.

Britt: What are some of the biggest challenges of the work that you do?

Viet-Ly: The biggest challenge is that some of the students have very low writing skills. They really do want to tell a story, but sometimes it's very difficult for them to begin because they're really intimidated by the writing process. One of our biggest challenges is to get them to just write. Trying to get those stories out and on paper for them is probably the biggest challenge.

Britt: What do you see as the next step for you?

Viet-Ly: I actually realized this year that being in a two-week workshop is really amazing and great, but I also wanted to know how they were doing throughout the whole entire year. So, I decided that I want to be a classroom teacher, and I've applied to school. Actually, I find out pretty soon, but I want to be a middle school Language Arts/Social Studies teacher. [Update: Viet-Ly was accepted into a teach credential program for this fall].

I also think that it was very surprising to me to work in the San Francisco public schools and not really encounter any teachers of color in the public schools. That really baffled me. So I think it's really important for teachers of color to be in the classroom, especially in middle school. Maybe there are more in elementary or high school, but in the middle school, we just didn't run into any, especially with language arts or social studies. So, I think I want to play that role; I want to be that role, be a support for the students throughout the whole time and see them grow and learn for an entire year.

Britt: Can you talk a little more about why you think it's important for there to be teachers of color for young people in the San Francisco public middle schools?

Viet-Ly: I really think that a lot of classrooms I've been to that are taught by white teachers, there's a certain kind of environment, or a certain kind of atmosphere that's set, and there have been some situations where I've seen that a student's home life, or a student's home culture is not necessarily valued in the classroom. I really think it's important to combine, or kind of interweave, a student's home life and a student's school life together, and just make it a whole process, a whole life. It's important for students to be comfortable in the classroom, and to go home and be themselves, and also come to school and be themselves, and feel safe, and feel supported in the school.

A lot of that has to do with language development, too, that I've seen. Students will say that if they're speaking their home language in the classroom, a student or a teacher will say, "Speak English! Speak English!" The students get offended. They're like, "Why can't I speak my home language?" It gets shoved to the side. I want to value a student's process of learning English, because I think it's really important, but at the same time, I want to keep their home language alive.

I think students having more teachers of color in the public schools is also important so that students can see a part of themselves in front of the classroom and see people of color in positions as an administrator or as a teacher. So not only can they be a student, but they can also be a teacher and create that cycle of, "I get an education, and then go back to education," because that needs to continue happening.

Britt: Why do you think there aren't as many teachers of color in the public schools?

Viet-Ly: I have no idea. [Laughter] I don't know. Maybe it starts from students of color not having a great experience in the public education system so they kind of wonder, "Why would I go back there?" It's not the most revered profession in terms of salary and praise, so...I actually have no idea, but I want to change it.

If you know a Solutionary Woman who works for a nonprofit or NGO who you think I should profile, please email me at britt at brittbravo dot com with their name, organization and contact info.