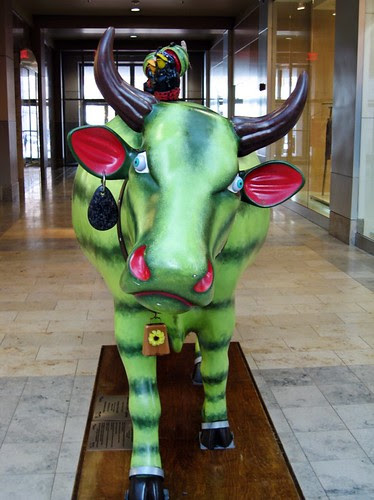 I have to admit that I'm a half and half organic shopper. When a pound of asparagus is $12 or a red pepper is $3, not so much for me, but I always try to buy organic milk 'cause the whole having hormones and antibiotics in my milk thing really grosses me out. I usually buy from Horizon, largely because I can find it in most stores, until now.

The Organic Consumers Association, nonprofit public interest organization, has called for a boycott of Horizon and Aurora organic dairy products and the Cornucopia Institute, a farm policy research group based in Wisconsin, filed a legal complaint last Thursday with the USDA against Horizon Milk.

According to the Cornucopia Institute's press release:

The crux of the controversy, which has smoldered within the organic industry for over six years, stems from a small handful of industrial-scale dairies, managing 2000-10,000 cows, that are allegedly producing milk in feedlot conditions without adequately grazing their cattle as required by law.

As consumers, we need to be selective about what we boycott 'cause given where most of our food comes from these days, there wouldn't be much left to eat if we boycotted everything that should be boycotted(!), but I'm going with this one because as the green wave grows, I do think it is important for corporations that are jumping on the green bandwagon to be held accountable and not be allowed to slap the word organic or green on just anything.

I'm going to try to buy Straus Family Creamery based in Marshall, CA. The Cornucopia Institute gave them 4 out of 5 "cows" on their Organic Dairy Report.

Update: The afternoon after I wrote this post I went to my local grocery store and low and behold, they weren't carrying any Horizon products and had replaced them with Organic Valley products from La Farge, WI. The Cornucopia Institute gave them 4 out of 5 "cows" too.

milk
horizon
organic
Posted by Britt Bravo at 8:31 AM