A Small Group Can Make a Big Difference 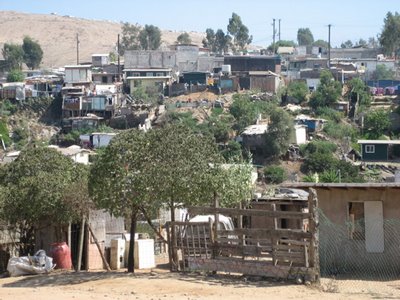 I've been thinking a lot lately about everyday activism, things that we can all do to make the world a better place. Last month I wrote a post, Cocktails and School Supplies, about a fundraising event in Los Angeles that our friend Meg produced to collect money and school supplies for a school Covenant House (a shelter that houses homeless and runaway youth) is opening in Tijuana. Her event raised over $2,000!

Last weekend Meg, a group of young people from Covenant House, and other volunteers and Covenant House staff members went down to deliver the supplies. I thought I would share Meg's story of their trip as an example of the difference a small group of people can make, and the difference your check can make, even if it is small, when you donate to a charitable organzation. As Anna Lappé said in my interview with her, even if you feel like what you are doing is a drop in the bucket, your drop, combined with others, could be the one that makes the bucket spill over.

After being stopped going into Mexico by border guards who turned us around (apparently carrying cargo into Mexico without a permit is a no-no no matter how noble one's intentions) we rallied and headed to a border crossing to the East that let us through. We were late getting to the school and the kids had been anxiously waiting for us for hours so we rushed to set up and get the supplies organized in a way that would ensure that everyone left with something and all the supplies were used.

After about an hour we started the party and kids and their moms arrived to pick up clothes, do arts & crafts projects supervised by the Covenant House youth (we brought 19 CH youths with us on the trip) and of course pick up school supplies and backpacks! We were able to hand out 210 backpacks and had about 20 left over to leave with the school for children who missed the event. Each backpack was STUFFED with school supplies that many of you generously donated and the money that we raised allowed us to rent an extra van and bring over a thousand bottles of water along on the trip. We also filled the school's storage unit with supplies that will be used throughout the year.

It is difficult to convey the true scope of these peoples' living situation. All the land around the school was originally landfill and part of the city dump. Some 20,000 people have colonized the area, erecting crude shelters out of scrap metal, wood and cardboard where they now live with their families and children.

The women who run the school are extraordinary and next up I'm hoping to raise enough money for them to build a permanent house on the site for volunteers who want to commit a year to living and working with the community.

If you would like to continue to support the school, contact Margaret Farrell (MFarrell@covca.org). She can accept donations and tell people how to get involved. If you want tips from Meg about how she made her fundraising event such a success, ask your questions in the comments of this post.

Photo Credit: "Outside the School" by Meg Martin.