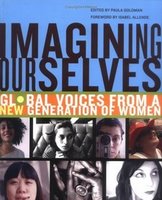 I've posted a couple of times about giving circles, groups of people who get together to learn about an organization's work, and pool their donations to have a greater impact. Because I love to read, I've been thinking it would be cool to have a Giving Circle Book Group where the group reads an inspiring book by a nonprofit, or an individual affiliated with a nonprofit, and then gives to that cause.

Between Two Worlds: Escape from Tyranny: Growing Up in the Shadow of Saddam by Zainab Salbi and Laurie Becklund. Salbi is the President of Women for Women International, an organization that helps women affected by war to rebuild their lives.

With All Our Strength by Anne Brodsky. Brodsky documents the inside story of the Revolutionary Association of the Women of Afghanistan (RAWA). According to their site, "RAWA is the oldest political/social organization of Afghan women struggling for peace, freedom, democracy and women's rights in fundamentalism-blighted Afghanistan since 1977."

Imagining Ourselves: Global Voices from a New Generation of Women, an anthology edited by Paula Goldman for the International Museum of Women.

Harvest for Hope: A Guide to Mindful Eating by Jane Goodall. Jane Goodall has founded so many things including the Jane Goodall Institute, and Roots and Shoots, a community service program for young people. (This was my favorite book of 2005).

Hope's Edge: The Next Diet for a Small Planet by Frances Moore Lappe and Anna Lappe. Mother and daughter founded the Small Planet Fund to support the citizen-led solutions that they document in their book. (2006 isn't over yet, but so far this is my favorite book of the year).