Vegan Cupcakes Take Over the World 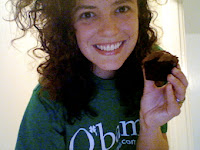 It really doesn't get much more have fun and do good than vegan cupcakes. That's why I requested a review copy of Vegan Cupakes Take Over the World, and I haven't been disappointed. Last week I made vanilla cupcakes with chocolate frosting, and tonight I made chocolate cupcakes with chocolate frosting. Both were tasty! They aren't the healthiest vegan desserts--the frosting is made from margarine and shortening and they use refined sugar, but I'm not complaining.

If you don't want to use refined sugar they have a recipe for Simple Vanilla and Agave Nectar Cupcakes, and if you can't have gluten there are Vanilla and Chocolate Gluten Freedom Cupcake recipes. After eating cupcakes this weekend, and last weekend, I'm thinking that the Sexy Low-Fat Vanilla Cupcake with Fresh Berries recipe might be a wise next choice.

If you want some healthy vegan dessert recipes without refined sugar, I've made a lot of good ones from How It All Vegan by Tanya Barnard and Sarah Kramer. The Ginger Snaps and Banana Oatmeal Cookie recipes are especially yummy.

I wish I could say I was a virtuous vegan, but I'm not, I just like to cook vegetarian and vegan food when I can. Long ago I was a vegetarian, and then a vegan, and then a macrobiotic, but now I'm more of a believer in the, "Eat Food. Not too much. Mostly plants," school as described by Michael Pollan in his New York Times article, "Unhappy Meals" (which is a great read).

If you are a cupcaketarian like me, you might also enjoy the Vegan Cupakes Take Over the World and Cupcakes All the Time blogs.