Blessed Unrest: How the Largest Movement in the World Came Into Being 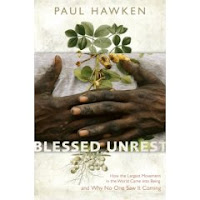 Ten years ago I used to take the bus every day from downtown San Francisco to South San Francisco where there was an Odwalla office. I was their Donation Coordinator at the time (this was before they were bought out by Coca-Cola).

I read a lot of books during that commute, but the one I remember the most was The Ecology of Commerce by Paul Hawken. Before being green was cool, Hawken was writing about the environmental impact of business and the importance of balancing profit and planet.

It was hard to find books like Hawken's back then, and although ten years later I can't remember a lot of the book's specifics, I remember how I felt, hopeful and excited by a new vision for business.

Similarly with Hawken's newest book, Blessed Unrest: How the Largest Movement in the World Came into Being and Why No One Saw It Coming, there is a lot information in it, particularly about the history of the environmental movement and how it has become interconnected with the social justice movement, but more than the facts, it is the feeling that was my greatest takeaway, that we are all connected, that all the actions taken by concerned individuals, nonprofits and NGOs are part of a larger global movement that will make a difference.

Hawken talks about the hundreds of thousands of individuals and organizations working to heal the world's problems as the earth's immune system:

"Antibodies bind not just to pathogens but to many types of cells, even themselves, as if the lymphatic system were a chamber of commerce mixer of locals feverishly exchanging business cards. In The Web of Life, Fritjof Capra writes, 'The entire system looks much more like a network, more like the Internet than soldiers looking out for an enemy. Gradually, immunologists have been forced to shift their perception from an immune system to an immune network.' . . .Its function does not depend on its firepower but on the quality of its connectedness."

To leverage this network and strengthen the connections, Hawken's Natural Capital Institute has created WiserEarth, "a community-editable international directory and networking forum that maps, links and empowers the largest movement in the world – the hundreds of thousands of organizations within civil society that address social justice, poverty, and the environment." Any do-gooders anywhere in the world can join ( I just did!).

Not only is Blessed Unrest's message a call to tired environmental and social justice activists to look up from their single-minded focus and realize that they are part of a larger movement that they can connect with and draw energy from, but for all people it is a reminder that one person can make a difference, but together we can heal.

Full disclosure: I requested a review copy of Blessed Unrest from Viking.