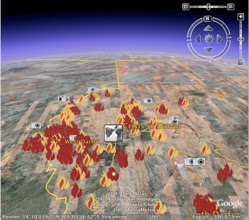 He began the talk by telling the story of the first time Google Earth was used for awareness raising by Rebecca Moore, Program Manager, Google Earth Outreach. Two years ago, Rebecca presented a logging flyover at a Neighbors Against Responsible Logging (NAIL) meeting. In the NAIL case study on the Google Earth Outreach site, she describes the experience:

"At the packed-to-overflowing community meeting in September, 2005, I first presented this KML to about 300 residents. When I flew in from outer space to the Santa Cruz Mountains, and then turned on the long, red swath representing the logging zone, there was a gasp from the audience. We then flew virtually up the Los Gatos Creek canyon:

I also flew to the actual locations and photographs of old-growth redwoods which could be cut. Then I used the Ruler tool in Google Earth to measure the distance from the logging zone to the preschool and daycare center: ~200 yards.

The flyover electrified the room. Suddenly everyone began to call out issues, questions, concerns that were now apparent in the plan.

You can view the Google Earth KML file Steve used for his presentation here:
http://earth.outreach.googlepages.com/geo.kml

For those of you who are asking, like I was, what the heck is a KML file? KML (Keyhole Markup Language), it is just a type of file format, like a PDF is a file format.

You'll need to install Google Earth (it's free) to view the file, and it is best viewed in the newest version of Google Earth (4.2). Videos in the balloons will only work on Windows.

Steve talked about how Google Earth can make the world a smaller place and add faces and places to statistics, like the USHMM's Crisis in Darfur layer does (pictured above).

It can also, map how the world changes through time and space like the animated layer created by Declan Butler, a senior reporter at Nature magazine, to show the spread of reported cases of avian flu in animals and people. You can watch it on the KML file above, or on YouTube: Declan Butler's Avian Flu Outbreaks in Google Earth

You can also watch polar bears on the move with the World Wildlife Fund's Polar Bear Tracker.

Steve also highlighted the work of Appalacian Voices' End Mountaintop Removal layer. The projects' organizers reflected on the impact of using Google Earth for their campaign in their Google Earth Outreach Case Study:

"In the ten days following release of the Appalachian Mountaintop Removal KML in Google Earth, more than 13,000 people from every US state and more than 30 countries signed this online petition to stop the dumping of mountaintop mining waste into waterways. Not only has this endeavor brought additional regional and national media attention to the issue (with stories in hundreds of newspapers nationwide), but the traffic on iLoveMountains.org and the number of people joining the movement to stop mountaintop removal has been boosted to a new level.

Just as important, this project's partnership of a half-dozen less-than-tech-savvy grassroots organizations from across Appalachia has created a new and much stronger framework for cooperation of local and regional organizations on the national stage. We are already working together to create additional projects to release on the Google Earth platform, and our ability to share information and resources with each other has expanded tremendously.

Finally, he went over some of the tutorials on the Google Earth Outreach site like:

Creating KML From a Spreadsheet
Adding Time as a Fourth Dimension