The Path to Survival: Relocalization, Water Conservation and Heirloom Preservation 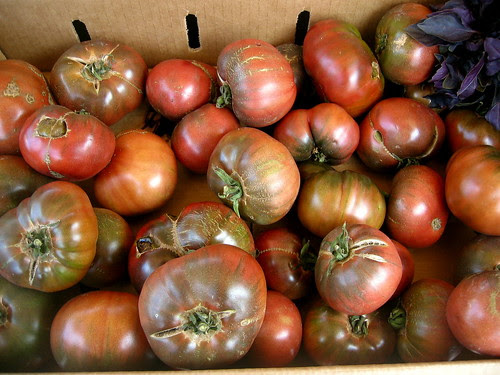 Thanks to a referral from fellow BlogHer, Tara Hunt, I had the opportunity to fill in for a panelist at the Bioneers Conference yesterday--an annual meeting of environmental and social justice activists. For me, the highlight of the day was hearing Winona LaDuke's talk, "Seeds the Creator Gave Us."

LaDuke is a Native American activist and environmentalist who received the Reebok Human Rights Award in 1988, was named Woman of the Year in 1998 by Ms. Magazine, and was inducted into the National Women's Hall of Fame earlier this month. She is the Founding Director of the White Earth Land Recovery Project.

LaDuke talked mainly about about her fight to save wild rice in the Northern Minnesota Lakes region from genetic engineering. As she wrote in her article, Ricekeepers, for Orion Magazine:

"An estimated 90 percent of the world’s biodiversity lies within the territories of indigenous peoples, whether the Amazon, the Indian subcontinent, or the North Woods. A new form of colonialism, known as biocolonialism, is reaching deep into the heart of these communities."

What stayed with me the most from her speech was her closing, when she listed 3 things we need to do, "to make a path we can survive on in this Millennium."

1. We need to re-localize food production so we aren't dependent on oil for food to get from farm to table.

As One Shade Greener writes in Relocalize with the Post Carbon Institute,

"As oil continues to become less affordable and less available, our lifestyles will probably require some tweaking: fewer car trips, living closer to work, consuming more local products and services. In effect, we will localize our lives and economies."

The Post Carbon Institute has set up The Relocalization Network as a resource for "post carbon groups" to relocalize their communities.

In response to yesterday's New York Times article, The Future is Drying Up, Lisa Moore, writes on the Environmental Defense Blog,

"So what can we do? Water conservation is an absolute must. Some water managers believe that with the right choices, we could meet most municipal, agricultural, and ecological water needs with the dwindling supply. But conservation has to go hand-in-hand with a concerted effort to decrease the greenhouse gas emissions that are driving climate change."

Treehugger has a list of 11 ways you can save water excerpted from 50 Ways to Save the Ocean by David Helvarg.

Carey Greenburg-Berger writes, in Vegetables Were Healthier Fifty Years Ago,

"The heirloom tomatoes in your garden may not just be tastier than commercially grown vegetables, but healthier too, according to a study from the American College of Nutrition. The study looked for 13 nutrients in 43 crops grown from 1950 to 1999 and discovered that the vegetables enjoyed by our grandparents were significantly more nutritious than the veggies found on supermarket shelves today."

Places like Seed Savers Exchange and Native Seeds are two nonprofits helping to preserve these important, and yummy vegetables.

The presence of indigenous people was strong at the Bioneers this year, including the International Council of 13 Grandmothers. Whether you believe in science or the wisdom of native peoples, both are saying that how we produce and consume food and water has to change.

Photo of Heirloom Tomatoes by me.