In Search of Hope: The Global Diaries of Mariane Pearl 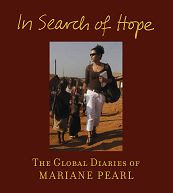 "[N]ow I have an answer for my son, who lost his father to blind hatred. Yes, there is hope in the world, and it isn't naive or even idealistic. It is real."--Mariane Pearl, In Search of Hope.

In 2006, journalist Mariane Pearl traveled the globe for Glamour magazine to profile women who are changing the world. She traveled over 100,000 miles and interviewed 12 women activists who are working on solutions to everything from sex trafficking, to global warming, to AIDS.

Glamour and powerHouseBooks have produced a collection of Pearl's interviews in, In Search of Hope: The Global Diaries of Mariane Pearl, which includes a Foreword by Angelina Jolie. This clothbound, limited edition book includes over 200 full color photos from Pearl's travels, as well as updates to some of the the interviews since they originally appeared in Glamour. 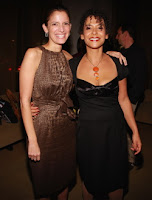 If you aren't familiar with Pearl's story, she is a pretty phenomenal person. She was 5 months pregnant when her husband, journalist Daniel Pearl, was murdered by extremists in Pakistan in February 2002. Rather than succumb to fear, she has made it her mission to fight terror with courage.

In A Mighty Heart, her account of the search for her husband, George W. Bush asks her, "How come you're not bitter?" She responds,

"I told him that if I let bitterness overcome me, I would lose my soul, and if I lost my soul, I also would lose Danny's.' This, I told the President of the United States, 'is my biggest battle.'"

In Search of Hope is part of that battle for herself, and for her son, Adam. She explains in the Introduction:

"More than a year ago, I embarked on a journey around the world--a physical trip with a spiritual motivation. It had to do with the meaning of life and the meaning of the deaths of those I have loved, but first and foremost, it had to do with my son. How could I inspire my boy, Adam, now five years old, to embrace the world and claim it as his own? It would be legitimate for him to be scared; aren't we all? But was there a way he could genuinely feel hopeful instead?"

The stories of women like Somaly Mam, a former child sex worker in Thailand who works to help girls in the sex trade; Sheila Watt-Cloutier, a global warming activist who is trying to preserve the Inuit way of life before it melts away; Dr. Julian Atim, a Ugandan doctor who lost her parents to AIDS and has fought to make ARVs more affordable; and Mariane's story itself, are models of human strength and perseverance in the face of extreme adversity. They each transformed their personal pain to create change for the greater good.

If you order In Search of Hope on Glamour.com, Glamour will donate 100 percent of the book's proceeds and royalties to charities (listed below) selected by the women who were profiled.