Giving When You're Unemployed: It Could Make You Happier and Wealthier 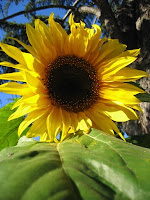 Americans tend to define themselves by their work. How many times have you gone to a party and been asked, "What do you do?" When you lose your job, you can lose not only your cash flow, but also your confidence.

What's one answer to the unemployment blues?

A September 2007 Ode magazine article, Giving Makes Us Happy, describes a 60-year study by Paul Wink of Wellesley College that followed the lives of about 200 people. One of the findings was that many of the people who said they were happy had, "generativity--the ability to give to others."

A March 2008 report in Science magazine, Spending Money on Others Promotes Happiness, found that, "spending more of one's income on others predicted greater happiness both cross-sectionally (in a nationally representative survey study) and longitudinally (in a field study of windfall spending)."

Arthur Brooks' September 2007 article in the Journal of Economics and Finance, Does Giving Makes Us Prosperous?, concludes that giving can make you more prosperous.

According to the article's abstract:

"Nonprofit economists have always assumed that income is a precursor to giving. In contrast, many philosophical and religious teachings have asserted that it is giving that leads to prosperity. This article seeks to test the non-economic hypothesis, using data from the 2000 Social Capital Community Benchmark Survey. It identifies strong evidence that money giving does, in fact, influence income."

There are so many ways to give. Even a small financial gift can make a big difference. For example, according to the U.S. Fund for UNICEF, $15/month can provide, "20 packets of high energy biscuits specially developed for malnourished children."

Below are 10 low-cost ways to give. What would you add to the list?
Cross-posted from BlogHer. Britt Bravo is a Big Vision Consultant.
Photo of Sunflower by me.