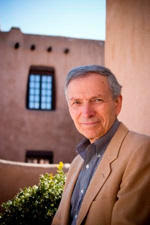 "If we start losing cultural diversity, we begin to lose our whole sense of community because community is defined by culture. We want to give people an opportunity to really develop, innovate, and preserve their own culture."

A week, or so ago I interviewed my Dad, Tom Aageson, for a special Father's Day show on the Big Vision Podcast. I've posted an edited transcript of the interview below.

You can also listen to the interview on the player at the bottom of this post, on the Big Vision Podcast landing page, or on iTunes.

In addition to being the co-founder of the Global Center for Cultural Entrepreneurship, he is the Executive Director of the Museum of New Mexico Foundation. Since moving to Santa Fe, he has developed New Mexico Creates, an economic development initiative that creates market links for New Mexico artists and artisans. He is also the co-founder of the International Folk Art Market.

Before moving to Santa Fe, he was the Director of Aid to Artisans, an international artisan enterprise development NGO.

We started our conversation with my dad describing what cultural entrepreneurship is:

Tom Aageson: Cultural entrepreneurship is an effort on the part of an entrepreneur who is very committed to cultural development and sees opportunities. They're really visionaries. They're catalysts for economic development for cultural workers to develop enterprises that are either for-profit, or not-for-profit, it can be either, that generate employment.

They also enrich the community's culture, and they use cultural capital. That can mean, for example, language; it can mean architecture; it can mean food; it can mean artisan work, or artistic work. It's all a resource that can be converted into an enterprise for a community.

They can also use things like creative tourism to develop an enterprise based on people coming to experience the culture.

Can you give an example, or tell a story so that if someone saw it, they'd say, "Oh! That's what that is. That's cultural entrepreneurship."

For example, in my own life, one of the things I started was the Maritime Gallery at Mystic Seaport. A dedicated maritime gallery did not exist before. There were many artists painting part-time in this genre, but none of them really had a market.

We created a sales gallery at Mystic Seaport Museum Stores, and began to invest in developing markets with collectors for artists. We developed; for example, a juried show. We developed an international competition that always had very prestigious juries. That business really caught on, and it produced support for the museum. It also built up a wonderful market to the point where over six for-profit galleries opened up, and began to do business, all the way from Seattle to Annapolis to Newport, Rhode Island. That would be one example of taking an initiative, and starting an enterprise.

Another would be - a friend and I are co-founders of the Santa Fe International Folk Art Market. We decided to build this market for master folk artists from around the world. This was 7 years ago. It is now the largest international folk art market in the world. It does close to $2 million a weekend that the artists take home to their communities. Forty-five countries are represented, and 130 folk artists are represented. We really created a market for that.

Or you take somebody like Dan Storper, who started Putumayo. He went around the world collecting traditional contemporary folk music, assembled those into themes on CDs, and began national distribution. He created a whole genre we now know as World Music.

There's a woman in India, Darshan Shah, who started a weavers' co-op. That co-op now has 600 women working, and weaving using traditional methods. She takes what they make into international markets in London and New York. She's been in the International Folk Art Market. There are many examples like that of efforts to create markets to help entrepreneurs build their cultural enterprises.

Social enterprise and entrepreneurship started to address social issues in a community. So, it was generally focused on some social issue that was often around employment and/or to develop opportunities for farmers. For example, organic and fair trade yogurt, or coffee, which helps the coffee growers in Latin America.

In the case of cultural entrepreneurship, we're addressing - not necessarily a problem, but sometimes that's true. We're focused on developing opportunities for people who are making their livelihoods in the field of culture.

For example, I'd seen potters in Peru whose tradition was to make clay water jars for their community. They'd bring them into the market, and sell them. Well, with the evolution of mass production of plastics, their neighbors started buying plastic buckets. Their market for clay water jars disappeared.

What we've been able to do is look at that situation. You have talent, you have raw materials, all the skills, but what you don't have is a product that's ready for a different market. We would work with them on product development, and then bring them into new markets. We're really working directly with people who are making cultural-related products. That's the difference between the two.

Giving people an opportunity, especially those who might be losing markets, enhances cultural diversity in our world. We know, through the franchise device and other globalization issues, that we're tending towards becoming very homogeneous. There is standardization that's required in international business, so cultural diversity is really at odds with this.

If we start losing cultural diversity, we begin to lose our whole sense of community because community is defined by culture. We want to give people an opportunity to really develop, innovate, and preserve their own culture. The US is one of the biggest exporters of "culture products." For example, our music, our movies. They come with huge marketing dollars. So, in that case, they're overwhelming local markets with American product.

The reaction has been, on the national level, in many countries, to create cultural policy that lends support to local artists so that they have an opportunity to make their films, music, artistry, paintings, or sculpture, and bring them to market so that they're not overwhelmed by our exports, and the exports from the UK.

People value the expression of creativity coming out of the community, the diversity, and our concern with the issue of globalization making everything the same. On the other hand, globalization offers a tremendous opportunity for people in the cultural community because it broadens, and widens their market.

As co-founder of the Global Center for Cultural Entrepreneurship, what role does it play in the field of cultural entrepreneurship?

The role it plays is to really focus on the entrepreneur. There are many people in this cultural field who aren't necessarily entrepreneurial. In all my experience, what I've found is that it's the entrepreneur who can take the idea, develop it, create an enterprise, and along with it, create better livelihoods for people.

Our role is to really help the cultural entrepreneur. We do that through mentoring. We find other entrepreneurs, in, or outside of the field of culture, to help mentor these entrepreneurs so that they can build their enterprises. Therefore, they help themselves, their families, and their community. This is one of the areas where we can do a lot in rural development as well.

A lot of social entrepreneurship work has to be done in urban areas, where many of the social problems exist, whereas cultural entrepreneurship can be done in both rural and urban areas. There are a lot of opportunities there, and we didn't see anybody really addressing this so we said, "Why don't we begin to develop this and get into rural areas?" like New Mexico, which is very poor, and begin to help those entrepreneurs come forward into the market.

How can people get involved in the Global Center's work?

It depends on their interests. They can certainly let us know if they're successful entrepreneurs, and if they think they'd like to be a mentor. They can give the Center financial support to expand its programs. Eventually, we will go global, and there may be opportunities in other countries that people know about, as well. We have a lot of experience in training people to build their cultural enterprise.

I've always had a heart for artisans and their creative work. I've admired what they do. Out of that I have a basic philosophy which is, "Do what you love and love what you're doing."

I just said, "Maybe we really ought to start this." It was just like this friend, and I sitting down and saying, "Why don't we start a folk art market where one didn't exist before?" We saw the need for that, got really excited, and a lot of other people got really excited. It's the same with the Global Center for Cultural Entrepreneurship.

We've also started a program here called New Mexico Creates which uses our museum shops as a market link for New Mexico's artists and artisans. We were able to increase our buying from $300,000 a year to over a million dollars a year by featuring more of their work, and working with the artists to improve their products.

It came just out of this caring.

Of course, you know that my blog is called, "Have Fun Do Good." How do you have fun and do good?

As I said before, by really doing what you love and loving what you're doing. Out of it comes a lot of fun, and you end up doing a lot of good in a community that can always use an extra hand. Our cultural community is not the highest paid in the world, and anything we can do to build opportunities for increasing their livelihoods is meaningful to a lot of people.

I enjoy what I'm doing, and it results in good.

Is there anything else that you want to add before we close, about the Global Center, cultural entrepreneurship, or anything else?

The website for the Global Center is www.culturalentrepreneur.org. New Mexico Creates is www.newmexicocreates.org. The International Folk Art Market is www.folkartmarket.org. I think people will enjoy looking at some of those sites. Perhaps they'll inspire a conversation, and people can get in touch with me through the Global Center's site.

The intro and outro music was from Kenya Masala's song, "Mango Delight." The closing song was "Bricks" by Crowsong from their album, Crowsong.

If you have suggestions for other people I should interview who have big visions for a better world, please email me at britt AT brittbravo DOT com.