"[A] gift is something that is given. You don't own it. The world does.
The world is asking you to use it. You don't get to say no,
no matter how much you may want to." - Eli Stone 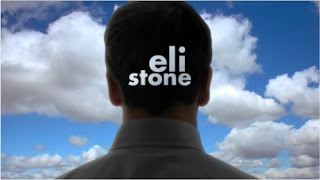 Over the past couple weeks I've been watching Eli Stone, the 2008-09 TV dramedy that (sadly) was cancelled after two seasons. Eli is a lawyer who sees visions (which are often musical numbers) about people he needs to help. While fighting courtroom cases, he struggles with his own, and others' belief in his visions, his relationships as his life path changes, science vs. faith, and free will vs. divine will.

I loved the series and haven't been able to stop thinking about it.  If you want to check it out, it's available on Netflix (DVD and streaming) and the 1st season is on Hulu.  Here's a little musical clip from the Pilot to give you a taste: