A Beginner's Guide to Changing the World 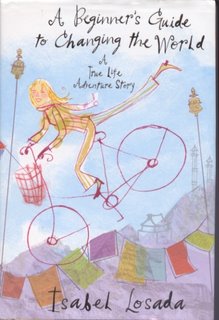 I just finished a really great book called, A Beginner's Guide to Changing the World by Isabel Losada. If you live outside of the United States, you can probably find it under the title, For Tibet, With Love. It's a great book to start the year off with. Thanks to my friend Danny who gave it to me for Christmas.

A Beginner's Guide to Changing the World describes Losada's journey from navel gazer to activist. What starts as an Ask Jeeves query, "What can I do about Tibet?" leads her to demonstrating outside the Chinese embassy in London, traveling to Tibet, jumping out of a plane to raise money, organizing a 50-foot banner of the Dalai Lama to be unfurled from Nelson's column and meeting the Dalai Lama.

What I liked most about the book was that she doesn't make it seem easy, in a normal way. So many autobiographies of activists either make the story of their life seem filled with such tragic and extreme obstacles that you think, "I could never be as strong as them," or seem so easy and flowing you think, "I could never be as intelligent/talented/lucky as them." But Losada's book describes the kind of obstacles to changing the world that everyone faces--lack of funds, apathy, bureaucracy, stressed out co-workers and bad weather.

At first when I was reading it, I was sort of frustrated by reading about all of the small challenges, but then I realized that this is how it is when you want to create social change. Yes, there are big dramatic obstacles, but a lot of it is day to day difficulties.

And how does Losada move through it? She gets frustrated and annoyed like a normal person, and she focuses on her goal, gets support from friends, perseveres and repeats her mantra (the Serenity Prayer):

At her interview with the Dalai Lama, she asks him how a person can know the difference between what he or she can change, and what they can't. He answered:

Through experiment. Research. Calculate whether you can achieve on mental level, then experiment. . . .from the Buddhist viewpoint the action, whether right or wrong, ultimately much depends on motivation. Result not very sure. Your intention, something good. Good purpose, good goal. But some other factors, conditions, results may not go that way. So it doesn't matter. Your motivation is very sincere. The result is not predictable. Difficult.

I wonder if as many activists, nonprofit workers, social workers and the like would get as burned out if they knew that their positive intentions and motivations, the fact that they tried to make a difference, is what really matters.