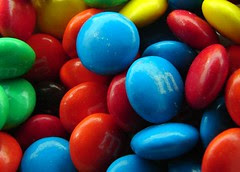 Last August I wrote a post, Pink M&Ms and Fair Trade, about child slavery in the chocolate industry. Looks like Steffanie Rivers read some of the same disturbing statistics I did. She writes in her column for EURweb:

"We could talk about the 12,500 child cocoa workers in Africa who have no relatives in the area - a sure sign of trafficking. We could present evidence that shows 284,000 children perform hazardous tasks on cocoa farms, and that more than half of the Ivory Coast child cocoa workers don't attend school, creating a permanent underclass.

We could listen to M&M/Mars President Paul Michaels tell us that his company, the fourth largest, privately owned company in the United States wants American consumers to trust their voluntary standards agreement; an agreement that doesn't guarantee fair and stable cocoa prices. But to do so would be like watching a movie for the tenth time - been there and done that."

The Washington DC based Rivers has initiated a 28-Day Chocolate Fast that started on February 1st, and she is organizing a silent protest outside of M&M/Mars headquarters on Tuesday, Feb. 13th. If you would like more information about the protest, you can email her at teamtcbadvertising@hotmail.com or check out the Washington DC Fair Trade Coalition Meetup page for information about another DC-based M&Ms/Mars protest.

Please be sure to buy your sweetheart fair trade chocolate this Valentine's Day. Here is a list of chocolate brands that are fair trade certified. I'm partial to Dagoba myself.

You can also send that special someone a cute fair trade coffee e-card from Oxfam's Generation Why site that says, "Love Coffee; Love Fair Trade; Love You."