I've always wondered why people cry when they see famous people, until yesterday. 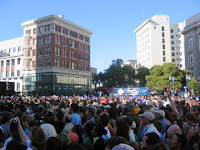 for the Barack Obama rally on St. Patrick's Day (the San Francisco Chronicle has a great bird's eye view photo here). One of the people we were standing next to said it was like being at a Stones concert, "But we're not stoned." It had that rock concert feel. People were clutching copies of The Audacity of Hope hoping for an autograph, holding cameras over their heads to catch a photo, and filling every empty space to get just a little bit closer. 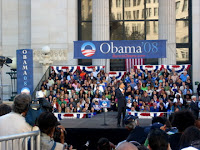 . Seeing Obama (the photo below was my view) confirmed what I had already felt from reading his books and listening to his podcast, that he is a leader for our time, and that he will change our world. As my friend said, "I don't think our generation has every experienced something like this." I guess that is why I started crying when I saw him.

You can watch some of the best parts of his Oakland speech here, and sign up for his mailing list to find out when he is coming to your city at http://www.barackobama.com.

All the photos are by me. If you use them elsewhere please link back here. Thanks (:

Obama
Oakland
Posted by Britt Bravo at 8:47 AM