Women Rise Up Against War: Rae Abileah of CODEPINK 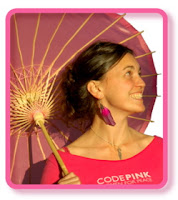 "[M]ore than 90 women become widows each day due to continuing violence countrywide. The Ministry of Women's Affairs estimates that there are at least 300,000 widows in Baghdad alone, with another eight million throughout the country."

To celebrate the first day, and hopefully prevent the recurrence of the second, here is an e-interview with Rae Abileah, the Local Groups Coordinator of CODEPINK.

CODEPINK is a women-initiated grassroots peace and social justice movement working to end the war in Iraq, stop new wars, and redirect our resources into healthcare, education and other life-affirming activities. CODEPINK rejects the Bush administration's fear-based politics that justify violence, and instead calls for policies based on compassion, kindness and a commitment to international law. With an emphasis on joy and humor, CODEPINK women and men seek to activate, amplify and inspire a community of peacemakers through creative campaigns and a commitment to non-violence. Check us out at www.codepinkalert.org!

2. What do you do as the Local Groups Coordinator?

As local groups coordinator, I connect CODEPINK's national campaigns with the grassroots women's movement for peace, and brings organizing resources to local coordinators. In a practical sense, that means that I: answer dozens of emails, write action alerts, facilitate training conference calls, paint on giant pink slip banners, coordinate activist trainings and national events in DC, empower women to take a risk and speak up for peace, think of creative ideas to get our message out, counsel women on how to effectively and peacefully work together (and avoid needless infighting), and help get new local groups started.

A lot of my organizing is done over the Internet, though I am most nourished by my direct face-to-face experiences working with women around the country. It’s so inspiring to see people I’ve spoken with on the phone and chatted with over email in action marching around the Capitol, speaking up in hearings in Congress, making lasting sisterly bonds at a national organizing retreat, and to virtually take part in grassroots actions around the country by posting action report backs and photos to our website. Check out our local spotlight with great action photos on our site.

3. How did you get involved with CODEPINK?

This an exciting story. I graduated college in New York City the summer of 2004 and went to the Republican National Convention (RNC) protest at the end of that August. I looked on Craigslist to find a ride back home to California, where I grew up, and found a post for a woman with a CODEPINK truck who was offering her truck as a moving service to help fund her trip from California, and her activist work. I emailed her and asked if she’d take a person in addition to my stuff, and we met up at one of the RNC protests outside a courthouse. We knew instantly that it would work well to travel together.

The phenomenal woman with the giant CODEPINK truck, Sam Zanne Joi, and I traveled through the deep South and Southwest, weaving our way through little towns in the Appalachian mountains with names like War, West Virginia, and Truth and Consequences, Texas. Everywhere we stopped (and I mean everywhere, from coffee shops to gas stations to parks) we talked with women about the importance of voting and firing Bush. I learned the CODEPINK rap—about how we must stand up for peace in the face of the color-coded terror alerts and other government scare tactics, and how as women we can empower ourselves to be strong leaders for justice in our communities—from Sam as we traveled. We blogged every step of the way, uploading our travel stories at libraries and free Internet cafes. You can read about the trip on our blogs listed below.

When we reached California, Sam was adamant that we needed to go to Ohio to continue registering voters, so I joined her for the northern trip on I-80 and we spent two weeks in Ohio going to concerts and riding the subways, registering voters all the while. From there I went up to Wisconsin to continue voter outreach efforts, this time targeted at getting out the youth vote. The day after the election (my birthday, actually), I flew home to California, feeling defeated, and met with CODEPINK co-founder Medea Benjamin, who inspired me to stay active and continue the struggle. I traveled to DC for the second inauguration of Bush, protested with CODEPINK, and got inside the inauguration ceremony and Bush’s Black Tie and Boots Ball for some powerful disruptions.

I have worked with CODEPINK’s counter-recruitment campaign, coordinated our book tour, assisted with every national campaign over the past two years, and now serve as the local groups coordinator. My work is deeply fulfilling and is the best medicine for hopelessness—I am daily inspired to truly believe that another world is possible.

4. What is the biggest challenge of your work?

The biggest challenge we face is achieving our goal—stopping the war in Iraq, bringing home our troops, and supporting Iraqis to build peace—in the face of US apathy, misguided belief, and a wealthy ruling class that is addicted to oil interests and power. We face the challenge of learning how to build a diverse movement that is inviting, warm, serious, and also playful and compassionate.

Currently we are facing the challenge of pushing the newly elected Congress to stop buying Bush’s war by voting against the supplemental spending bill. Unfortunately, our representatives easily speak out against Bush and his troop escalation, but get tripped up about the funding because they fear that they will not be supporting our troops. Our task is to help them, and the American people, see that supporting the troops is cutting funding for the continuation of the war, and caring for our troops with adequate healthcare services when they get home. If Congress buys the war again, we must make them aware that now they own it, and all the responsibility that comes with being at the helm of an occupation—the blood will be on their hands.

Our biggest success is that a group of visionary women came together with the intention of preventing an attack on Iraq, sat outside the White House every day and reclaimed the color pink as a powerful color for peace, in the face of a government based on fear and lies... And their actions caught like wildfire and have spread throughout the country (and world!) to create the foundations of a women’s movement for peace and justice. That movement has achieved wonders in the past four years: a pink slip campaign to fire the president that included dropping giant pink slips (large banners shaped like ladies’ lingerie), speaking out inside the Republican National Convention and inside of numerous speaking events with Bush and Co., hosting a tour of Iraqi women who visited over 100 US cities speaking about the need for the US to leave their country,

The real success is the mom with a son in Iraq who emails me and says, “I want to do something. Please let me know how I can help.” The tenth grader who wants to show a film about Iraq in school and calls us for support. The security guards in Congress who whisper that they feel blessed when they see us entering the building day after day.

6. How can readers get involved with CODEPINK?

Visit our website, www.codepinkalert.org, to sign up for our weekly action alerts and find out how to get involved with CODEPINK. You can find a local pink group in your area, see our current campaigns and photos from actions, and sign onto the Give Peace a Vote pledge. You can also start by being CODEPINK—speak with people you meet everyday about the important and urgent need to bring our troops home from Iraq; join local peace rallies and marches; use creativity and feminine energy to bring truth to power. Most importantly, your Congressperson NEEDS to hear from YOU! Call, email, and visit your rep’s office and urge them to vote to stop funding the US occupation of Iraq. Find contact info for your elected leaders at www.house.gov and www.senate.gov. Join us in DC in the months ahead to pressure Congress to defund the war in Iraq! CODEPINK will have a house and will be taking action daily in the halls of Congress and around town.

7. What are some of your favorite blogs written by women?

Sam Zanne Joi’s blog about her travels around the country spreading the CODEPINK peace message.

CODEPINK’s Iraqi Women’s Tour in the US

Posts by Linda Milazzo, especially this one.

Faiza, an Iraqi writer, has a blog, A Family in Baghdad.

Divine Caroline, a new site dedicated to publishing writing by women, has a great Changemakers category in their Neighborhood and World section.

Check out CODEPINK’s favorite pink blogs (and advice for how to start your own).

My newest favorite thing to peruse is this site called www.wefeelfine.org—it’s a program that searches blogs, myspace, etc. by characteristics (gender, age, country, weather) for emotions. Check it out.

Rae can be reached at rae@codepinkalert.org.

CODEPINK
women
war
activism
Posted by Britt Bravo at 8:12 AM