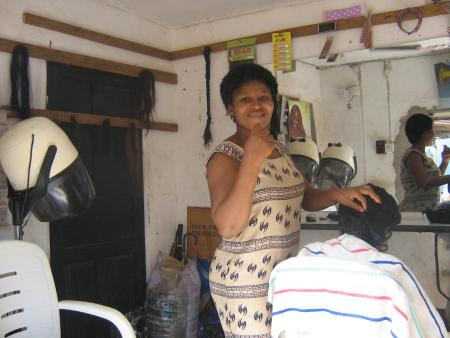 Since 2005, 27-year-old Beatrices Amoka has been running her Peace “o” Hairdressing Salon where she sells weavon, hair cream, and relaxer. She also fixes hair, and does pedicures and manicures. Working with the Lift Above Poverty Organization in Nigeria, Beatrices requested a loan of $400 for her business though Kiva.org, which she will pay back monthly over an 8-month period.

Kiva.org allows individuals, like you and me, to lend entrepreneurs, like Beatrices, money through PayPal with loans of as little as $25. When I loaned her $50 yesterday (my first Kiva loan), only one other person had given her a loan, Sergio from Switzerland. When I checked this morning, 7 more people had contributed to her loan request (Rick, Matthew, the 2007 Pryor Class, Anish, Mark and Emily). Her loan is now fully funded.

Kiva was started by a husband and wife team, Matt and Jessica Jackley Flannery. In my interview with her last fall, Flannery explained, "In the very, very beginning, Matt and I had this idea, 'How neat would it be if we had individual, real people on our web site with their needs, and the amount of funding that they need? I'm sure we could get people to help them and to loan money to them, so let's just try it.'" They launched the site in 2005.

Two years later, Kiva has taken off. It has received tons of press, and can barely meet the demand from the growing number of individuals wanting to fund loans. You can follow the organization's growth and adventures on the Kiva blog, and on Matt's blog, the Kiva Chronicles, on the Skoll Foundation's Social Edge site.

Julia of How I Changed the World Today posts about the loans she makes through Kiva almost every day and has a map on her blog of where her loans originate.

Green Girl at Perry Family Fun recently loaned $25 to Gregorio Castillo, who will use the loan to buy a cow to restart his dairy and fuel his business as a farmer.

Ryan Gunderson of Riches for Good also made his first Kiva loans last week. You can see the profiles of the 8 people he made loans to here.

Microcredit's detractors argue that poverty can be better alleviated by creating jobs. Although a program like Kiva may not be able to fully address the systemic causes of poverty, clearly, it fills a need for the people who request the loans, and its popularity indicates that it fills a need for the individuals who fund the loans as well. The process empowers both parties to create positive change.