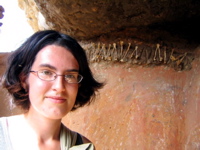 "Many people imagine international health as this fashionable, sexy, and fun job. Nope. Most of it is administration. Plus, malaria, hookworm, ringworm, and typhoid are distinctly unsexy. Yet, it is remarkably rewarding."--Caitlin Cohen of the Sigida Keneyali Project.

In December I wrote a book review of Monique and the Mango Rains, the story of a Peace Corps worker's two years working with a midwife in Mali. Below is an e-interview with another woman making a difference in Mali, Caitlin Cohen, one of two US coordinators of the Sigida Keneyali Project. Caitlin tells it like it is--the nitty gritty of starting up an NGO, and why she believes it is important to help the people you are serving to create the change they want to see, not to create the change for them.

Thanks to Michael Stein for referring me to Caitlin. If you know of a woman doing amazing, world changing work that you think I should interview, please email me at britt AT brittbravo DOT com.

Sigida Keneyali means “Health in Our Homes” in Bambara, the most common language in Mali. It is a collaboration between American students and residents of Sikoro, a dusty periurban town of 65,000 people outside the capital city of Bamako, Mali. The project is part of the start-up NGO, “Mali Health Organizing Project” (MHOP, not to be confused with a Malian conglomerate of IHOP. We’re not too good at making pancakes…)

Sigida Keneyali is about improving a community’s capacity to advocate for itself, and improving its health situation using lay knowledge and civil society. Practically, what this means is that the principle component of our program is a Community Health Action Committee (CHAG), responsible for designing, implementing, and evaluating their own public health and social development projects. The CHAG is given considerable liberty with what they do, but they must rely mostly on local resources and advocacy. Some funding is exterior, but we are and will remain a low-budget organization, relying on the volunteerism of American students and Malian citizens.

Sigida has existed on the ground for only seven months. In addition to establishing the CHAG and its Malaria initiative (see below), we have fixed and furnished a community center and started women’s occupational training and health courses. Soon, we will be starting a microfinance program, and also an “emergency loan” program to help people seek medical treatment when they need it, not when they happen to be able to pay for it. The CHAG conducts peer education with 1400 people, but the advocacy and development programs work with the entire village.

How did you get involved in the Sigida Keneyali Project?

I came to Mali two years ago to work on a sociological study on HIV and vaccine use. In this process, I discovered that I dislike research and dislike the way most NGOs work (big cars, obsession with AIDS, self-promotion at the expense of effectiveness). But I love Mali, and particularly the communality and generosity evident in Malian culture. Two friends and I decided to co-found Sigida as a result of these three impulses. I am currently on leave of absence from my university to work on establishing this project.

What is the biggest challenge of your work?

The biggest challenge is definitely the fact that an “NGO” in Mali is seen as a “waritigi” (money owner). The people here have seen wells built and schools constructed at inflated prices. Three years later, the wells are polluted, the school cannot recruit any teachers, and the NGO is nowhere in sight. As a result, it is hard to convince people that we are about helping them lead their own projects using existing resources. Certain members of the community want to get as much money out of the project as they can, expecting that we will not be around in two years time. It takes a lot of effort (and a lot of going to baptisms, chatting with neighbors, and making people tea) to overcome this perception.

The other big challenge is logistics… I spend inordinate amounts of time filling out IRS forms, transcribing focus groups, writing grants, writing emails to volunteers, talking to lawyers about liability, etc. Since I live in Sikoro, much of this is conducted with an INFERNALLY slow internet connection on a computer with a French keyboard running off of a bus battery. It is hard to help my host family wash laundry, make this goopy millet dish called “to”, and then retire to my room to read the fine print on tax forms! They think I am being antisocial, and they have very little perception of what my work is, or how much time it takes. (Plus, tax forms aren’t fun, no matter where you are.)

Many people imagine international health as this fashionable, sexy, and fun job. Nope. Most of it is administration. Plus, malaria, hookworm, ringworm, and typhoid are distinctly unsexy. Yet, it is remarkably rewarding.

Sigida is an accumulation of many small success stories, nothing flashy. We’ve only been on the ground for seven months! However, I think our biggest success story has just started…

Sikoro has one two-bedroom clinic. They get 40,000 patient visits per year. It is 3 km from one end of the town to the clinic. I was at a wedding the other day, and found that the father of the family had died four days prior because of diarrhea. He couldn’t walk to the clinic because he was too sick. Similarly, I came across a woman giving birth on the side of the road. I spoke to one of our CHAG members about this, and she started crying and told me she had lost her 21 year-old son to a motorcycle accident because no taxi would come up the unpaved hillside and take him to receive health care.

I asked the CHAG why no one had constructed a clinic in the far end of Sikoro. They informed me that the community had formed an oversight committee, bought a parcel of land, described the clinic they wanted, and set up a system to finance its personnel through the sale of pharmaceuticals. Four years ago they went to the municipality, and asked them to build the clinic. The municipality essentially said, “no taxes, no services.” The community came up with some tax money, and it disappeared to the netherworld of Malian bureaucracy/corruption. The municipality then shirked its responsibility, telling the community to go find some NGO to foot the cost of the clinic. Now the villagers (most of whom are squatters, and do not own their land) say “no services, no taxes.”

Our CHAG is advocating with the mayor’s office to assert their right to civil services. If the mayor’s office agrees in writing to fund the majority of the cost of the clinic, the committee will again go door-to-door as impromptu tax collectors, and MHOP will match what they raise. The CHAG will manage the funding so that it doesn’t fall victim to corruption as it did in the past.

This project has great potential because it not only provides a necessary service, it helps ameliorate the impasse between the community and the municipality, proving both that the municipality cares about the community, and the community is willing to sacrifice to get services. It establishes a positive precedent for taxation with local accountability. Our committee gets the chance to assert the community’s rights, and see that it has an effective voice. Plus, it releases some existing tension between the two sides of Sikoro. I will be ecstatic if it all pans out this year. It would, of course, be much easier for us to just fundraise and build the clinic ourselves, but then we wouldn’t get any of these other positive results.

You did a survey that revealed that the village's most serious health problem is malaria. What will the Sigida Keneyali Project do to help?

Malaria is a proximal problem… the real health problem is the extraordinary poverty in a peri-urban desert. The real problem is social exclusion. As I mentioned above, how Sigida works is as important as what we do.

That said, in a study we conducted of 1400 people, two thirds of the deaths last year were due to Malaria. All but one of the deceased was a woman or a young child. Right now the CHAG his planning on asking the Malian health system for mosquito nets for all pregnant women and children under 5 in a community of 1400. They are going to hold festivals every six months to educate about malaria and to treat these nets with insecticide en masse. They are acting as peer educators and conducting educational counseling in the homes of these residents about the use of mosquito nets, proper malaria treatment, identifying when to visit a hospital, and maintaining a clean household. Though it has little to do with malaria, they are also organizing village cleanup days, public trashcans, and (we hope) some system for the disposal of trash.

How can readers get involved with the Sigida Keneyali Project?

We can use any help we can get! If you are interested in volunteering your time, we have two volunteer positions open at any point in time Mali, preference given to students or recent college grads. We also need folks who know data analysis, native French, engineering, graphic design, web design, newsletter production, grant making, investment, or law. Also, we are a very small organization, and because of that (and our untraditional approach) we are eligible for very little grant money… as such we always need help fundraising. If you are interested in any above, contact me by email. (Caitlin_Cohen@brown.edu). If you wish to donate directly to the project, you may make a tax-deductible donation to “Mali Health Organizing Project” PO Box 20 Westminster Station VT 05159 or go to our web page in about a month and donate using paypal (www.malihealth.org).

Is there anything else you want people to know about the Sigida Keneyali Project?

The majority of development projects act on tight time frames with large budgets and material goals. They operate on a “Give us money and we’ll build six wells within two years” kind of attitude. Unfortunately, in so doing, the replace rather than develop local institutions and state services. We feel that true development is about civil society, laws, attitudes, and institutions. It is about a society’s capacity to provide for itself, not about having services provided. Poverty is not just about material need. It is, above all, about security and choice. Sikoroans don’t want a hand out, they want to work hard and see that their hard work produces results. We can provide local initiatives with institutional access to resources and information, as well as a little seed funding. We can help them see that their hard work can produce results. But it is THEIR hard work.

“Empowerment” is a word that has become completely cheapened through overuse. However, empowerment is what we strive to create. The Mali Health Organizing Project’s name in Bambara, “Setigiya Sabatili” means “the validation of the entitlement to power”. Empowerment is not something that happens during two-year grants analyzed by logframes. As the chief of the village of Sikoro regularly tells me, dondoni kononi b’a nyaga da: Little by little a bird builds its nest.

mali
health
NGO
empowerment
Posted by Britt Bravo at 8:54 AM