"Books of Conscience" to Read During Genocide Prevention Month 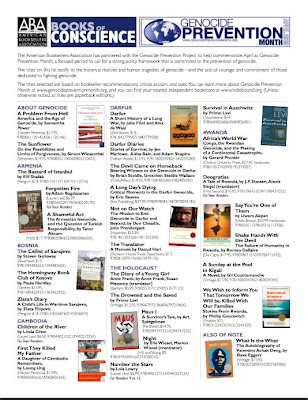 Did you know that six genocides began in the month of April? According to the Genocide Prevention Month's site, the genocide in Bosnia began April 6, in Rwanda April 7, in Cambodia April 17, in Darfur April 19, in Armenia April 24, and the Holocast began April 21st.

To raise awareness during Genocide Prevention Month, The Genocide Prevention Project and the American Booksellers Association have created a list of Books of Conscience, "a list of fiction and nonfiction, memoir, history, and reportage, which presents the historical realities and human tragedies of genocide."

If you would like your community to participate, the Genocide Prevention Month blog has instructions for how to Organize Your Bookstore or Library, and their site has guidelines for how to organize a book club or reading series.

For additional titles and ways to take action, read Martha Bixby's post Make a Difference for Darfur this April on Change.org, and Chris Michael's post, April: Genocide Prevention Month on The Hub blog.

It's difficult to read these kinds of books, and to acknowledge the violence humans are capable of inflicting on each other, but as we're seeing with the economic situation, and global warming, it is important to remember that all of our actions our interconnected.

As Martin Luther King, Jr wrote in his Letter from a Birmingham Jail:

"Injustice anywhere is a threat to justice everywhere. We are caught in an inescapable network of mutuality, tied in a single garment of destiny. Whatever affects one directly, affects all indirectly."

genocide
prevention
books
Posted by Britt Bravo at 8:38 AM