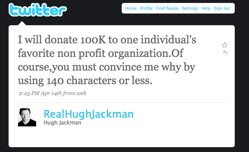 On April 14, Hugh Jackman (aka @RealHughJackman) announced on Twitter, a microblogging social network, that he would donate $100,000 to a nonprofit organization based on recommendations written in 140 characters, the character limit for a single post on Twitter.

Today, after going through thousands of entries with his wife, actress Deb Lee Furness, he announced the two winners who will split the donation (he wasn't able to decide between the two): 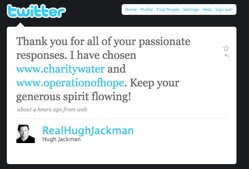 • charity : water, a nonprofit that brings clean and safe drinking water to people in developing countries.

• Operation of Hope, a nonprofit whose all-volunteer medical team donates surgeries to children in developing countries born with facial deformities.

"It's amazing to me that Twitter has now become a way for people to start talking about things that are really important to them and making a difference."

"It started out a toy, as this little thing you do for fun, and then you realize the power that it has if you can do some good with it."

What are you favorite ways that people are doing good with Twitter?

Hugh Jackman Splits $100,000 Between Two Charities by Sadao on Ryan Seacrest's blog, What's Happening. You can listen to the whole radio interview on this post.

Britt Bravo is a Big Vision ConsultantCross-posted from BlogHer.com.