Pick Me Up Photo: Gulf Oiled Pelican Before and After Cleaning 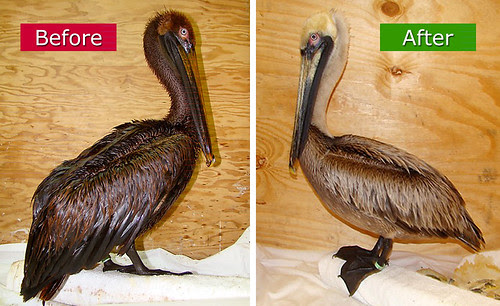 It was a photo released on Friday of a little gull covered in oil that really got me. Maybe it's 'cause that is how I feel when I see the extent of the devastation. Covered in heavy, black, viscous liquid, and paralyzed to do anything about it.

Today I found one photo (above) that cheered me up. A combo of before and after photos of an oiled Brown Pelican washed at the Fort Jackson, LA Oiled Wildlife Center from the IBRRC Flickr photostream. IBRRC=the International Bird Rescue Research Center.

Amazingly, I also found a link to an NPR story, A Little Bird Mired in Oil Illuminates a Big Problem, on the IBRRC Facebook page about the photo I saw on Friday, and the little gull is alive. Yay!

If you come across any other pick me up photos, or heartening bits of news regarding the BP Gulf oil spill, please pass them on.