Colombia is the 2nd Happiest Place for the Planet 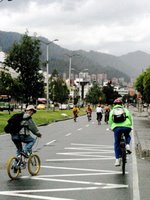 According to Ode Magazine, The Happy Planet Index, a project of the New Economics Foundation, ranks Colombia as the 2nd happiest place for the planet. The HPI is calculated by adding the country's life expectancy with its life satisfaction divided by its ecological footprint. The top ranked countries were:

"The Index doesn’t reveal the ‘happiest’ country in the world. It shows the relative efficiency with which nations convert the planet’s natural resources into long and happy lives for their citizens. The nations that top the Index aren’t the happiest places in the world, but the nations that score well show that achieving, long, happy lives without over-stretching the planet’s resources is possible."

I'm not sure if everyone in Colombia would agree with this index, but it is nice to see a positive portrayal of Colombia for once. My husband is from Colombia, and whenever we meet someone new, and he tells them that he's Colombian, there is an awkward pause, and then they make a joke about cocaine.

There is extreme poverty and violence in Colombia, but there are good things happening there, too. According to Worldchanging: A User's Guide for the 21st Century, the current mayor of Bogotá, Luis Eduardo Garzón, is:

"[E]xpanding school capacity to serve the 100,000 kids who don't currently have access to education. He's creating a network of volunteer doctors who'll regularly visit families in poorer neighborhoods. He's fighting hunger. One way Garzón is paying for these programs is by attacking corruption and tax evasion, which is a huge drain on the administration's expected revenues; so far his efforts seem to be working. Finally, in an effort to carry on the city's established commitment to its female citizens, Garzon filled all twenty of his submayoral posts with women."

The mayor before Garzón , Enrique Peñalosa, created miles of bike lanes in Bogotá. In the Gotham Gazette article, "Putting Cars Behind", Peñalosa writes:

"We started to build bikeways. In developing countries, the only means of individual transportation available to everybody is a bicycle. A bikeway in Bogotá is important maybe 20 percent because it protects cyclists, 80 percent because it is a symbol that a citizen on a $20 bicycle is equally important to one in a $30,000 car. We increased bicycle ridership, and we now have about 350 kilometers of bikeways."

In the same article, he also describes the a rapid-transit bus system in Bogotá, the Trans-Milenio:

"After only five years of operation, we are moving 1.4 million passengers per day. We copied the idea from the Brazilian city of Curitiba. The station is in the middle of the road. People pay when they enter the station, not when they go into the bus. When the bus comes, it opens four doors at the same time as the station doors open. You can get 100 people out of the bus and 100 people onto the bus in seconds because they have already paid and the bus is at the same level as the station, so it is accessible to wheelchairs."

Peñalosa also instituted a Car Free Day in Bogotá, which I believe continues to this day. One commenter on BikePortland.org notes:

"In addition to that one day event, they also close over 100 kilometers of streets every Sunday to cars. They shut down one side of divided roads and completely close a bunch of others to create a huge network of streets and paths for pedestrians and cyclists (and any other non-vehicle traffic). I was there visiting some family on one of these days, and it is amazing to see thousands of people out exercising on major roads and highways, completely closed to cars. It is like that every Sunday for several hours. They are really onto something good down there."

Photo of Biking in Bogotá by Adriano Bravo.