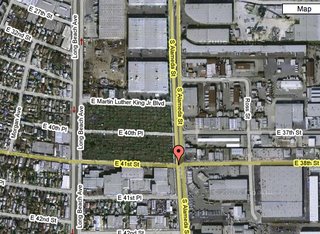 I'm not a regular consumer of vlogs, but I have to say that although I had seen a couple blog posts about the fight for the South Central Farm in Los Angeles, it was Daryl Hannah's luminous vlog post from the farm that made me take notice, particularly the little girl towards the end who says,

You have to save the garden because it is my life.

If you haven't seen it on the news already, a slew of celebs like Daryl Hannah, Julia Butterfly Hill, Danny Glover, Laura Dern, Ben Harper and Joan Baez are drawing the media to the South Central Farm by camping out in the trees and on the farm. South Central is the largest urban community garden in the United States. It has 350 plots that provide food for 300 low income, mainly latino families. Japhet Els of the Save the Garden blog posted a link to the map above which shows what an oasis the garden is in the urban neighborhood.

Jessica Hoffmann at the New Standard wrote a great article explaining what is going on, which I recommend you read because the history is long and complex, but here is my summary based on the article. In July 1994 the Harbor Department granted a revocable permit for the garden's land to the LA Regional Food Bank. The Harbor Dept. originally got the land from the city of Los Angeles who had taken the land from a private owner in the eighties, using "eminent domain", to build an incinerator. When the community, led by the nonprofit, Concerned Citizens of South Central L.A, protested against the incinerator, the city dropped the project. One of the original private owners in the eighties, Ralph Horowitz, fought the city for the return of the land until they sold it back to him in 2003. In January of 2004, the Harbor Dept. told the Food Bank that its permit would end in February of 2004. The farmers sued the city saying that the sale to Horowitz was a secret deal that violated their rights. They were allowed to stay on the land until the case was settled, but when it made it to the California Supreme Court, the justices refused to hear it. An eviction notice was put up on March 1st of this year.

One of the proposed solutions is for the nonprofit, Trust for Public Land, to buy the land from Horowitz. While these negotiations are going on, the farmers and their supporters are camped out at the farm.

Please take a moment to watch Daryl's vlog post or check out other video from the farm on YouTube.

Here are a few action items from Julia Butterfly's Circle of Life site that Van Jones included in a recent Huffington Post.

2. Call Mayor Villaraigosa and tell him that you want the City of Los Angeles to buy the farm back from the developer and give it in perpetuity to the South Central Farmers. (213) 978-0600

3. Make a donation to the South Central Farmers to help buy back the farm.

Although the farm's history is complex, and probably Horowitz has some legitimate claims on the land, urban community farms provide so many postives, and clearly this one benefits so many people, I really hope that humanity and nature will win this time.